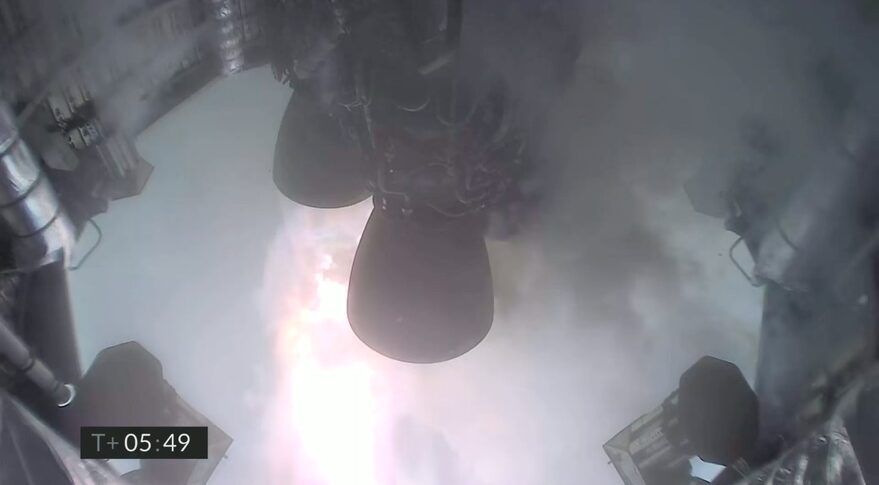 WASHINGTON — SpaceX launched its fourth Starship prototype in less than four months March 30, only to have the vehicle apparently crash once again.

The Starship SN11 vehicle lifted off at approximately 9 a.m. Eastern from the company’s Boca Chica, Texas, test site, despite heavy fog that made it all but impossible to see the vehicle ascend. The SpaceX webcast of the flight relied on video from onboard cameras.

The flight appeared to go as planned initially, with the vehicle going up to 10 kilometers altitude, then descending back to the landing pad. The onboard video, though, stopped 5 minutes and 49 seconds after liftoff, just as the vehicle reignited its Raptor engines for landing.

“It looks like we’ve had another exciting test,” SpaceX’s John Insprucker said on the webcast, several minutes after the loss of video. “We’re going to have to find out from the team what happened.”

He did not confirm that the vehicle had been lost, but independent video of the landing showed debris falling around the test site at the time of landing. SpaceX Chief Executive Elon Musk later acknowledged the vehicle was destroyed, tweeting that “At least the crater is in the right place!”

At least the crater is in the right place!

“Looks like engine 2 had issues on ascent & didn’t reach operating chamber pressure during landing burn, but, in theory, it wasn’t needed,” he added. “Something significant happened shortly after landing burn start. Should know what it was once we can examine the bits later today.”

The flight was the fourth of a Starship prototype to an altitude of 10 kilometers or more since early December. All four of those vehicles were lost either on landing or shortly thereafter. On the previous test, of Starship SN10 March 3, the vehicle appeared to land intact, only to explode less than 10 minutes later.

This flight was delayed a day after an FAA safety inspector was not able to get to Boca Chica before the window closed for the test. A revision to the FAA’s license for that series of Starship tests, dated March 12, requires an FAA inspector to be at Boca Chica for the tests.

The FAA added that provision after SpaceX violated conditions of its launch license on the SN8 test flight in December, which took place even after the FAA denied SpaceX’s request for a waiver for maximum allowed risk to the uninvolved public. While that flight caused no damage outside of SpaceX’s test facility, the FAA required SpaceX to conduct an investigation into the incident and delayed approval of the next test flight, SN9, in early February.

On March 25, Reps. Peter DeFazio (D-Ore.) and Rick Larsen (D-Wash.), the chairman of the House Transportation Committee and its aviation subcommittee, respectively, wrote to FAA Administrator Steve Dickson about that incident. “Given the high-risk nature of the industry, we are disappointed that the FAA declined to conduct an independent review of the event and, to the best of our knowledge, has not pursued any form of enforcement action,” they wrote.

The FAA, in a statement late March 30, said it would oversee SpaceX’s mishap investigation, as it has done in previous Starship mishaps. “The FAA will approve the final mishap investigation report and any corrective actions SpaceX must take before return to flight is authorized,” the agency said.

The FAA added it was looking into reports that debris from Starship SN11 was found several kilometers from the test site, well outside the exclusion zone for the launch. People attempting to watch the launch from the southern tip of South Padre Island reported finding lightweight debris, but it was not clear that, assuming it was from SN11, it came from the crash itself or fell off in earlier phases of flight. The FAA noted that there were no reports of damage or injuries from that debris.