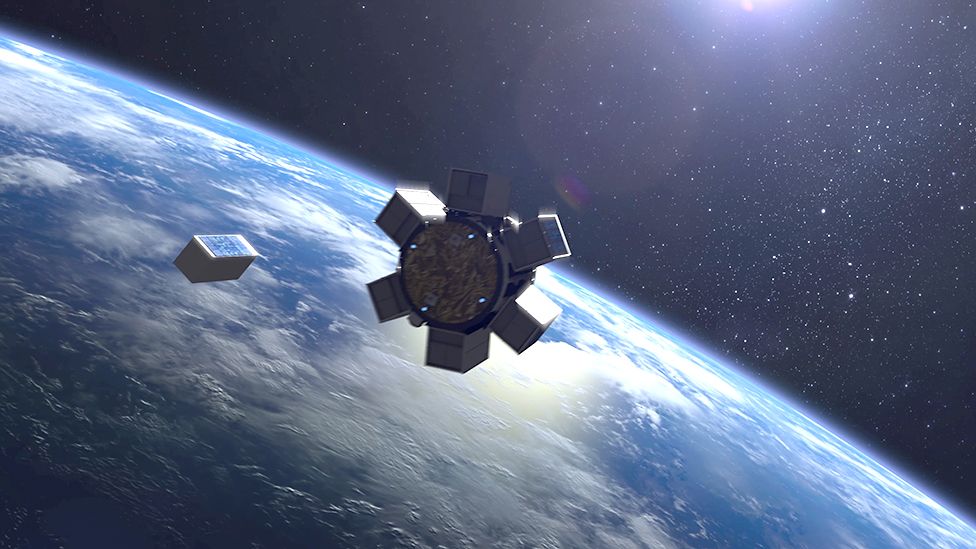 Artwork: The first Lockheed mission from Shetland will deploy a kind of space tug

Construction of a spaceport in the far north of the UK could finally get under way next month after planning permission was granted.

Three rocket pads would be built at the Lamba Ness peninsula in Unst.

The hope is the first launch of what’s likely to be a meteorological satellite could occur before the year’s end.

It will be a tight schedule, however. Both Saxavord and the rocket company tipped to send up the spacecraft will first need a licence from the UK’s Civil Aviation Authority.

The agency had expressed fears that the development might detrimentally impact the remains of a WWII radar station, but later accepted that construction could be done sensitively and would benefit Shetland economically.

“This is such a big day for us,” he told BBC News. “We’ve been on this journey for five years. We’ve had to overcome all sorts of obstacles, and I take great pride in this team. Until we got that planning permission, nobody was really going to take us seriously and we can now really charge on.”

Mr Strang said upwards of £43m would be spent over the next 18 months developing the Lamba Ness complex, rising to £100m in the next five years.

It’s likely some restrictions will be placed on Saxavord in terms of when launches can occur. A key period to be blocked out will almost certainly be the six weeks from 1 April because of bird breeding in the area.

The UK arm of the big American aerospace company Lockheed Martin has welcomed the planning approval. It has received funding from the UK government to organise launches in Britain.

Lockheed’s operator of choice is a California start-up called ABL Space Systems. ABL expects to prove its technology in a maiden rocket flight from Alaska in the coming weeks.

Assuming that goes well, it will then send over equipment to Shetland to prepare for a pathfinder launch in Unst.

Lockheed Martin has set up a control centre at Harwell in Oxfordshire. It’s in this centre that engineers will communicate with spacecraft that come off the top of the rocket.

Lockheed is developing a “shepherding vehicle” for the top of ABL’s rocket. This would carry several satellites, taking them to the locations in orbit where they needed to be dropped off.

To be clear, Lockheed and ABL are not the only ones eyeing Shetland as a base, however. It’s very possible that Polish and German companies could be launching sub-orbital rockets from Unst before the year is out. Sub-orbital mission go straight up and down; payloads do not stay in space. Typically, such flights are for scientific studies that need a short period where gravity isn’t dominating the experimental set-up.

Frank Strang said the space centre was in discussions with seven operators in total, including another American concern that could be announced in the coming weeks.

One of the seven is the British-Ukrainian rocket firm Skyrora, which would like to be a Saxavord launch customer come 2023.

There is a common misconception that all spaceports have massive infrastructure and look like the Kennedy Space Center in Florida, from where men left Earth to go to the Moon.

But many of the small rockets now under development require very little in the way of support buildings. The vehicles and their launch rigs are designed to fit in shipping containers for ease of transport.

Scottish ministers have 28 days to decide whether they want to review Saxavord’s approval.