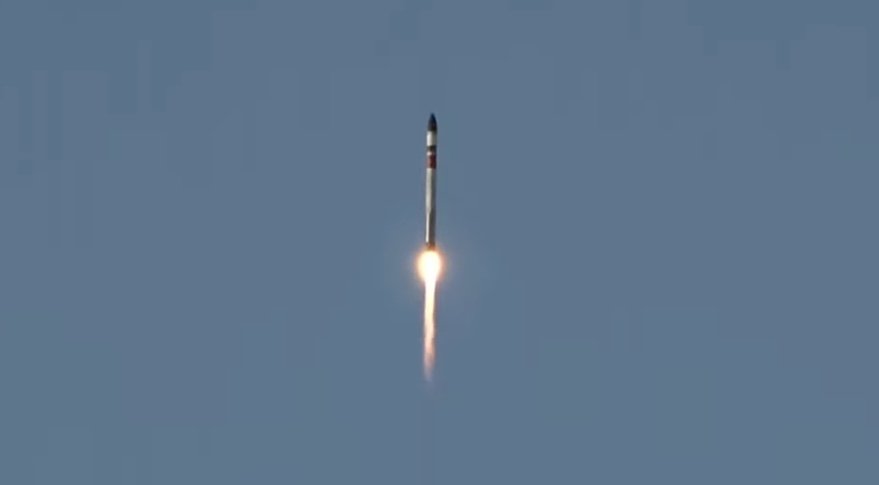 An Electron rocket lifts off Nov. 4 carrying the MATS satellite. While the rocket successfully deployed the satellite in orbit, the company was unable to perform a mid-air recovery of the booster. Credit: Rocket Lab webcast

WASHINGTON — Rocket Lab successfully launched a Swedish atmospheric science satellite on an Electron rocket Nov. 4, but a telemetry problem kept the company from attempting a mid-air recovery of the rocket’s booster.

The Electron rocket lifted off on the “Catch Me If You Can” mission at 1:27 p.m. Eastern from Rocket Lab’s Launch Complex 1 in New Zealand. The rocket’s primary payload, the MATS satellite for the Swedish National Space Agency, was deployed from the rocket’s kick stage about an hour after liftoff.

The company attempted to catch the booster, descending under parachute, with a helicopter equipped with a hook. That hook is designed to grapple the parachute, allowing recovery of the stage before it hits the water.

However, live video from the helicopter showed no sign of the booster, and Rocket Lab later said the mid-air catch had been called off. The company said it would instead recover the stage from the ocean, as on several previous launches.

Rocket Lab said in a series of tweets that launch controllers lost telemetry from the first stage as it reentered. “As standard procedure, we pull the helicopter from the recovery zone if this happens,” the company said. The stage safely splashed down and a ship was en route to pick it up.

After a great launch, we can confirm the primary mission is on track! Unfortunately no helicopter catch attempt today due to telemetry loss from Electron’s 1st stage during re-entry. As standard procedure, we pull the helicopter from the recovery zone if this happens pic.twitter.com/0tTnlh33Al

“Rocket telemetry dropped out (it happens a bit during reentry) but we did not regain a solid link in time,” added Peter Beck, chief executive of Rocket Lab. “Without that link it’s just not safe to put the helicopter into the recovery zone, so we stood it off.”

This mission was the second attempt by Rocket Lab to perform a mid-air recovery of the booster, the last step before the company would attempt to reuse the booster. Mid-air recovery avoids having the stage be subjected to salt water, which can damage some components.

Rocket Lab made its first attempt at a mid-air recovery in May, and the hook was able to grapple the stage’s parachute. However, the helicopter released the stage moments later after noticing what the company called “different load characteristics than what we’ve experienced in testing.” The stage splashed down instead.

The recovery attempt overshadowed the successful launch of MATS, or Mesospheric Airglow/Aerosol Tomography and Spectroscopy. The satellite was built by OHB Sweden for the Swedish National Space Agency to study waves in the upper atmosphere and their influence on weather and climate.

The 54-kilogram satellite was originally slated to fly as a rideshare payload on a Soyuz launch, but the Swedish government abandoned those plans after Russia’s invasion of Ukraine. The spacecraft was designed to operate in a 585-kilometer dawn-dusk sun-synchronous orbit, one for which rideshare opportunities were limited and thus driving the need for a dedicated launch.