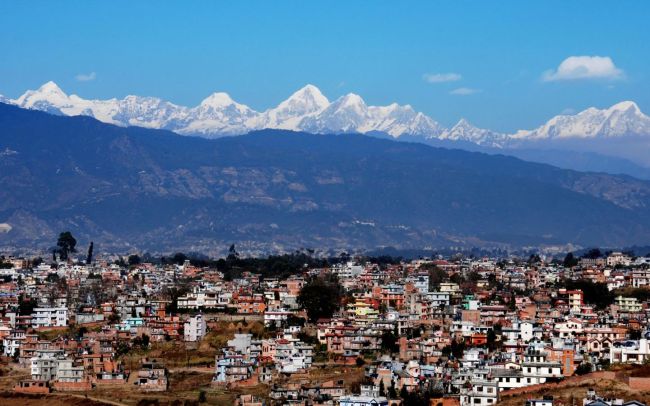 What a great experience I had as I arrived in Nepal today.

My plane from Delhi, India was an hour late taking off and I knew it would create problems for my friends in Kathmandu, Nepal who were going to meet me at the airport.

In 2016 four of our board members from the Global Network attended a space conference in Visakhapatnam, India and then went onto to Kathmandu to speak at several colleges in that city.  (You can see a report on that amazing journey here.)

On our last night in Kathmandu we had dinner with a large group of professors who asked if they could create a Global Network chapter in Nepal.  We of course loved the idea and it was done.  Professor Shreedhar Gautam became the president of the chapter.  Since that time delegations from the chapter have tried to attend our annual meetings in Huntsville, Alabama and Oxford, England but could not get Visas.  But this past spring, when we organized our Russia Study Tour, four persons from the Nepal GN chapter made their way to Moscow and we embraced them as long lost family.

Since I was coming to India anyway, I suggested that after the space law conference was concluded there, I could pop up to Nepal and meet with our dear friends once again.

So early this morning I left Visakhapatnam, India and flew to Delhi and then changed planes for Kathmandu.  Our plane was not only delayed out of Delhi, but once I arrived in Kathmandu I was stuck in the Immigration/Customs area for two hours getting through that cumbersome process.  I knew that being over three hours beyond when I was to arrive would likely cause problems for Shreedhar who was going to meet me at the airport and take me to a hotel.

So once I finally got out of the airport of course there was no one there to pick me up.

I looked around for awhile and decided just to wait and see what happened.  A nice young taxi driver approached me and asked if there was anything he could do to help me.  I told him my situation – and also explained that I am one of the few people in today’s techno world that refuses to use a cell phone.  He helped me get online on my laptop and I sent Shreedhar and email explaining the situation.

Next the cab driver went on his phone and did a search for Shreedhar that took some time but he finally found him and sent him a text.  But there was no response to either of us.  By now it was getting dark – I was tired and a bit hungry, which is not unusual for me.  So I decided I should just get a hotel room for the night and would keep working on making contact with Shreedhar.  So I asked the friendly taxi driver if he could take me to a decent, mid-priced hotel near the airport.  He of course said yes and drove me to a perfect place nearby.  He got me settled in and I asked him how much he wanted for his extraordinary services.  He said, “Just give me what you would like.”  He obviously was not out to take advantage of me, he sincerely was trying to help me and on the way to the hotel he explained that one should be kind to tourists that come to their fair city.  I told him I thought he was a good man.  He smiled in return.

Well needless to say I was quite generous with him.  I got tucked into my room, a quite nice place for only $40 a night and ordered a well-deserve Nepalese beer and a mushroom pizza from room service.  Soon after the beer arrived there was a knock on the door.  It was the cab driver who had Shreedhar on his phone.  They had finally made contact.  He had returned to the hotel and handed me his cell phone.

Shreedhar wanted to come and pick me up and take me to the hotel he had booked for me but I said no, I’ll stay here tonight and move to that hotel tomorrow.  He told me he has organized a gathering of his folks tomorrow night at the other hotel so we’d meet then.  He was sending our friend Prabhu Yadav to pick we up in the morning to escort me to the correct hotel.

When we came to Kathmandu in 2016 we made our first stop at one local university.  We were taken to a room with several professors.  The first thing they did was greet us with the words ‘Namaste’ which means “I bow to the divine in you”.  It was clear that the college was not in the best condition and my western mind wondered about the capacity of such a challenged institution.  But as soon as the professors began speaking to us I realized that these people were on a spiritual dimension I rarely, if ever, see at much fancier ‘higher educational institutions’ in the United States.

So even though today had its obvious challenges – it turned out to be a deeply enriching experience for me.  So on my second trip to Nepal I am again confronted with a touching reminder that there is a world outside of the western way of being that still remains real and connected to things that matter in life – hospitality, friendship, honesty, spiritual connection and much more.

America might have alot of money, much nicer buildings, an enormous military budget and the like.  But what it lacks is something I have experienced in Kathmandu, Nepal – a richness of spirit that most Americans long to experience.

I am glad to be here and be touched by this place.

Since arriving in Kathmandu, Nepal it has been non-stop action.  Yesterday the Nepal Chapter of the Global Network Against Weapons & Nuclear Power in Space organized a talk for me in a meeting room at the hotel where I am staying.  More than 40 people attended and the response to my description of the U.S. attempt for ‘control and domination’ of space was met with great concern.

Shreedhar Gautum (University professor and chair of the GN chapter here) organized the meeting which was attended by the former Nepal ambassador to Russia and a well respected nuclear scientist.  They both made opening remarks about the need to rid the world of nuclear weapons and war.

Today I was taken to the home of Prabhu Yadav (Professor of English and GN member) for a king’s feast for lunch prepared by his wife.  I was able to meet Prabhu’s two children and following the wonderful meal I was taken to a private English language school to speak to a large group of students from 10-16 years old.  They had many good questions including ‘What is area 51?’ and ‘Does God exist?’  So I was challenged by these young folks in a big way.

Following the talk to the students I returned to my hotel for a short rest and was joined for supper by Satya Shah who is the director of the NGO called Social Development Path in Nepal.  This NGO is also a member of the Global Network and works to help deal with the enormous poverty and social needs of the rural people.  Satya sent two of his staff to the recent space law conference in Visakhapatnam, India that the Global Network co-sponsored.

During our dinner together I asked Satya how climate change was impacting Nepal.  He told me that drought was becoming a serious problem in the southern part of the country and that rice and wheat production will soon be dramatically impacted.  The government is doing little he said to help deal with this massive coming climate catastrophe.  Likely the people from the south would head to the big cities like Kathmandu which already faces serious problems with over population, pollution and poverty.

In the morning I will have a breakfast meeting here at the hotel with Prabhu and his mentor who has expressed the desire to meet me.  After lunch time I will be picked up by Shreedhar and Tulsi Shrestha and taken to the airport for my 24-hour trip to Moscow.

Last night Tulsi (a retired local doctor) invited Shreedhar, another man, and myself to his home for dinner where we ate mountain goat (a once a year delicacy during the current Festival of Lights).  Tulsi (which means basil) told me that the mountain goat is good for the health as the animal only eats pure grasses and herbs high in the mountains of Nepal.

Tulsi came to Huntsville, Alabama in 2017 for a Global Network meeting and protest at the Army’s Redstone Arsenal where the Nazi rocket scientists were brought at the end of World War II to create the US space program.  Today the ‘missile defense’ program is largely headquartered there.  On that occasion Tulsi was the only person from Nepal that was granted an entry Visa by the US government – several others from the Nepal GN chapter were denied the right to attend.  Shreedhar explained that the US embassy staff in Kathmandu told him that a professor like him should not attend such an event in Alabama because we would be holding a protest at Redstone Arsenal.

I will leave Nepal more than impressed by the very generous hospitality shown by everyone I have met here.  They are a kind and giving people who treat guests with an abundance of love and  friendship.  Even though Nepal is by western standards a ‘poor nation’ they are rich in many ways that people in my country could learn much from.