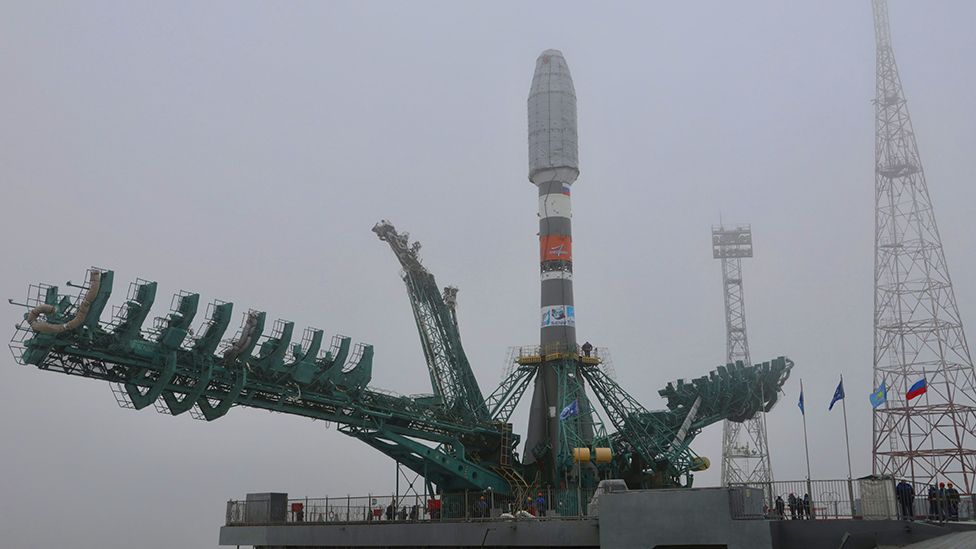 The UK has rejected Russian demands for it to sell its share in internet firm OneWeb to allow a satellite launch.

A Soyuz rocket carrying 36 OneWeb satellites is on the launch pad at Baikonur Cosmodrome in Kazakhstan.

Russia’s space agency Roscomos demanded guarantees the spacecraft would not be used for military purposes.

It then said it would not launch the rocket unless the UK sold its share in OneWeb – but business secretary Kwasi Kwarteng rejected this.

“There’s no negotiation on OneWeb: the UK government is not selling its share,” tweeted Mr Kwarteng.

The UK government, which has come under pressure to pull the launch because of the war in Ukraine in any case, said it was continuing to discuss the situation with its partners on the OneWeb board.

OneWeb itself has made few public comments in recent days, although the BBC understands this was because it wanted the space to remove its personnel from the Baikonur launch complex. This it has now done.

UK taxpayers helped buy OneWeb out of bankruptcy in 2020 with a £400m stake.

In an interview with Russia 24 TV channel, Roscosmos head Dmitry Rogozin said the agency had contacted OneWeb and its partner Arianespace to demand “comprehensive legally binding guarantees” that the satellites would not be used for military purposes.

“If by 21:30 on March 4 we do not receive confirmation, the rocket will be removed from the launch pad and the satellites will be sent to the assembly and test building,” he added.

According to Russian news agency TASS, Mr Rogozin said the OneWeb contract had been paid in full and the funds would not be returned.

“We received all the money for it for the manufacture of launch vehicles, upper-stages and for the necessary launch services.

“This money, due to force majeure circumstances that have arisen as a result of the aggressive policy of the West and the sanctions that are applied against Russia, this money will remain in Russia,” the Roscosmos boss stated.

Mr Rogozin posted a video showing pad workers at Baikonur covering over the flags of the UK, US and Japan from the fairing of Friday’s rocket.

Neither OneWeb nor the UK government will be taking direction from Mr Rogozin. His demands are impossible. The UK and US militaries want to use OneWeb, and ever since British taxpayers took a share in the company post-bankruptcy the talk has been about adding further defence and security capabilities to future OneWeb satellites.

Low-Earth orbiting broadband internet constellations present an emerging challenge for authoritarian regimes. While they can simply turn off terrestrial networks to control the flow of information, this is much harder to achieve with space infrastructure.

The numbers of satellites in these new constellations, and the speed at which they move across the sky, make them hard to jam.

US entrepreneur Elon Musk this week shipped antenna terminals to Ukraine to allow citizens there to use his Starlink broadband system.

At the moment, most of Ukraine would not be able to plug into OneWeb because much of the country is too far south for its signals. Future launches planned by OneWeb would ultimately though have filled in this gap.

Former UK government adviser Dominic Cummings, widely regarded as the official who persuaded Prime Minister Boris Johnson to buy into OneWeb, tweeted at the weekend that a situation such as that in Ukraine was in their minds when making the investment.

OneWeb has just a handful of launches left to complete its network of 648 satellites.

All of the missions are booked on Russian Soyuz vehicles that are scheduled to fly out of Baikonur in the coming months.

With the existing spacecraft it has in orbit (428), the company can deliver broadband internet connections to locations above 50 degrees North, which includes business customers such as BT in the UK, but it needs those additional satellites if it wants to run a truly global service.

Regions important to the company’s prospects, including the rest of Europe, most of the US, Africa and Asia, will be left out without the final set of launches.

What happens next is anyone’s guess, but a flight to orbit on Friday now seems highly unlikely.

OneWeb’s launch contract is with France-based Arianespace. It markets Soyuz vehicles to the world.

Following its emergence from Chapter 11 bankruptcy in 2020, OneWeb paid Arianespace upfront to organise all its launches.

Then there is the issue of the 36 satellites currently sitting on top of the Soyuz in Baikonur. They are the property of OneWeb.

They were manufactured in Florida in the US and their handling is therefore subject to strict American export controls covering sensitive technologies. These regulations would have seen the satellites’ shipment to Kazakhstan and attachment to the Soyuz rocket overseen by a US official. That official is also no longer present at the spaceport.