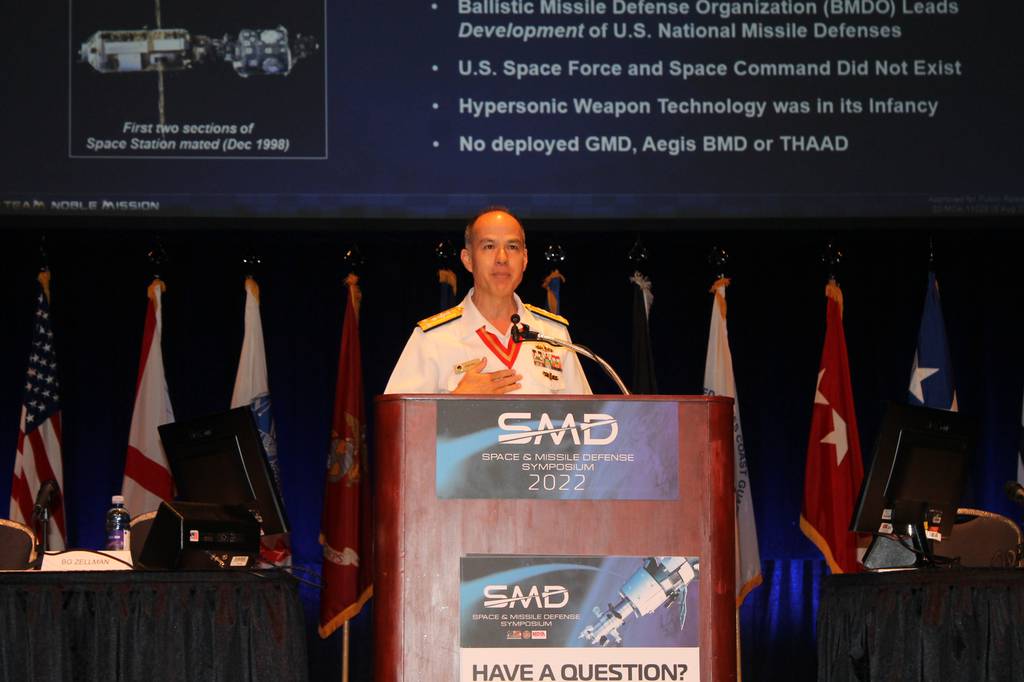 HUNTSVILLE, Ala. — Protecting the continental U.S. and Guam from missiles and hypersonic weapons are the top priorities for the Missile Defense Agency, Vice Adm. Jon Hill, the MDA director, said in an interview with Defense News.

At the top of his list is ensuring the Ground-Based Midcourse Defense system is capable now and in the future of protecting the homeland from not only intercontinental ballistic missile threats from hostile nations including North Korea and Iran, but also from emerging threats such as hypersonic weapons, he said during the Space and Missile Defense Symposium in Huntsville, Alabama.

The first ballistic missile defense system was deployed some 20 years ago, and so modernization of a system that can defend the homeland is key going forward, Hill said. MDA is working with two teams in a competition to develop next-generation interceptors to replace the current ground-based missiles in silos at Fort Greely in Alaska and Vandenberg Space Force base in California.

Northrop Grumman and Raytheon are competing against Lockheed Martin and Aerojet Rocketdyne to build the new interceptors. The plan, Hill said, is to carry both teams all the way through critical design review.

While the designs are different, both are incorporating multiple kill vehicles, Hill said.

“That’s where the threat drives us,” he said.

The teams will each need to pass through a preliminary design review in fiscal 2023 first to move forward and, according to Hill, the PDR process for the two teams will not be simultaneous as each team is on a slightly different timeline. The CDR will come roughly a year after PDR.

Lockheed announced just ahead of the SMD Symposium that it had validated prototype communications radio technology for NGI during a recent test, which is critical to ensure the interceptor can receive and share information from the ground across distant ranges, at high speeds and in harsh environments, according to Sarah Reeves, who runs the company’s NGI program.

The aim is to field the NGI by 2028. Industry has indicated to Hill that they think they can go faster, but, he added, “it is very early in the program.”

MDA also recently took steps to break up the contract to maintain and upgrade the GMD system, a contract long held by Boeing, in order to inject competition and thus drive innovation, Hill said.

“The real challenge now for the company that has picked up the GWS contract is the fact that you’ll have a mixed fleet” of old interceptors and new ones down the road, Hill noted. “That’s pretty complex.”

The next competition is for the systems integration test and readiness contract, according to Hill.

Who is responsible for defending Guam?

The MDA is also turning its sites on establishing an architecture to defend Guam against possible ICBMs, cruise and hypersonic missiles and even unmanned aircraft systems.

The agency will likely manage the ICBM and hypersonic missile defense components while the Army will take the lead on cruise missile defense. While MDA hasn’t “really started the program,” Hill said, it is funded in fiscal 2023 to lay down the basic architecture of the systems that will go on Guam.

MDA just wrapped up a second “siting summit” last week and walked through every single candidate that’s out there, Hill said.

“It’s not final, but we have a very good feel for at least technically and operationally where things should go in order for it to function as a system,” he said.

To get after the defense of hypersonic weapon threats, Hill said, MDA is working with the Space Force to get its Hypersonic Ballistic Tracking Space Sensor on orbit in FY23.

Demonstrating the HBTSS prototypes “will then allow us to work with the Air Force to determine what the next step should be in terms of constellation size and how they ought to be nested within the overall architecture,” Hill said. “So that’s kind of step one in terms of being able to track globally the maneuvering threat.”

While the team completes the build on HBTSS, MDA is waiting to get clarification on the manifest to know whether it will be launched in the spring or the summer, Hill said.

The U.S. gas the ability within today’s sensor architecture to “see and track some of these threats depending on where they are, [but] space makes it better for us,” he added.

MDA works within its Command and Control Battle Management Communication system to fuse existing space sensors as well as terrestrial and sea-based sensors to build tracks or fill in gaps.

While MDA did start off with three teams working competitively to develop a GPI solution, Lockheed was not selected to continue.

Moving forward in the competition are Raytheon and Northrop Grumman, teammates for NGI but foes for GPI.

The two teams will work toward a system requirements review later this year, Hill said, “so it’s a pretty fast turn around.”

“It’s not like we are starting from zero,” he said.