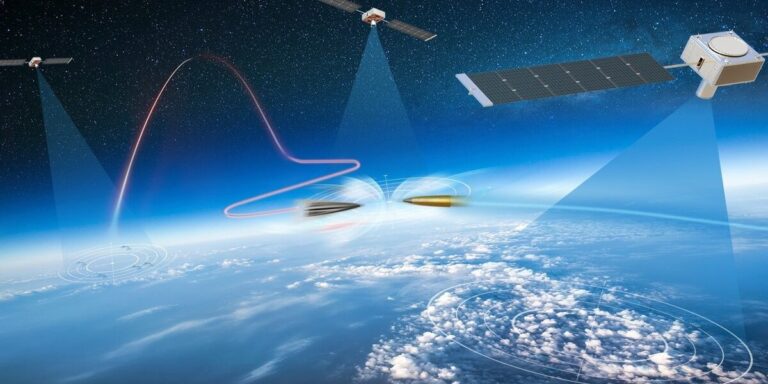 “One of the great values of space” is to “sensor architectures,” Hill told a webinar sponsored by The Hill newspaper. “That’s how we handle the global maneuver problem.”

Hill explained that, “if you don’t have a sensor, tracking from launch all the way through demise, there’s a period of uncertainty in that track. And what we don’t want to do is launch a weapon that then opens a seeker and there’s nothing there, because the target has maneuvered.”

Thus, he said, “being able to look down from space and have a global view becomes critically important and that’s recognized, not just within Missile Defense Agency, but within the services as a future area for investment, and we’re moving smartly in that direction.”

Hill last week said that DoD is about to launch a new Missile Defense Review, firmly based on defending against emerging threats. The last such review was released in January 2019 but actually completed in 2017.

Meanwhile, the agency asked in its 2022 budget request for $256 million in research, development, test and evaluation (RTD&E) funds for the Hypersonic and Ballistic Tracking Space Sensor (HBTSS) to better track ballistic missiles and, more importantly, hypersonic cruise missiles — the latter of which, DoD leaders worry, are being developed rapidly by Russia and China. MDA in January MDA awarded L3Harris a $121 million contract; and Northrop Grumman $155 million for each to develop a prototype for a sat-based, medium field-of-view sensor targeted specifically at keeping tabs on hypersonic missiles flying fast and low.

“We’ve really got to be careful here as space becomes a contested environment,” Cooper, one of the fathers of the Space Force, said. While noting that both Russia and China are building up their counterspace capabilities, Cooper said that given Moscow’s economic woes, Beijing is the real threat that needs attention.

“Russia is a declining nation. They have huge internal problems,” Cooper said. Russian President Vladimir Putin is “making the best of a bad situation” by “over-investing” in nuclear and missile capabilities. But at the same time, he added, “pretty soon he won’t even have the demographics to field a serious army by the way their population is declining.”

China, Cooper said, “is the more serious threat and they’re beefing up their nuclear capability dramatically, as well as their hypersonic capabilities. We need the ability to detect these threats.”

Space is an “integral foundation to almost every operation or aspects of operating for our military service branches,” Turner said. “In addition, it is the way we see, it is the way we assess the threat, and certainly for missile defense, it [provides] both our understanding of if we are at risk — if someone is attacking us — but also then how do we approach trying to neutralize that target.”

Citing increasing missile threats, Turner also made a pitch for directed energy weapons — something he has promoted for many years.

“The missile threat has been proliferating, both in North Korea and Iran who are pursuing you ICBM or missile technology, but also in other nations, and in the numbers of missiles that put the United States at risk,” he said. “So we’re not keeping up — we have a lot more to do, and I think it’s going to pull us into some new technology ultimately, which hopefully will be directed energy.”