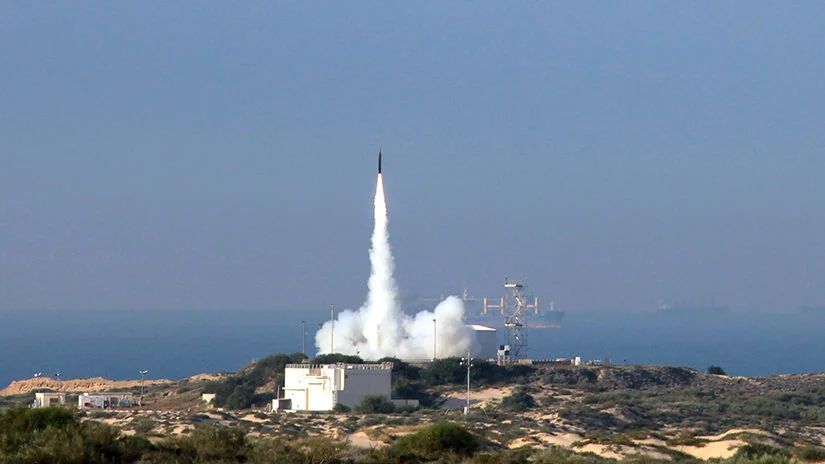 The Missile Defense Directorate in the Israeli Ministry of Defense is coordinating the related projects performed by some Israel defense companies. This is funded mostly with special budgets earmarked for the need to address a very critical threat.

TEL AVIV — While Israeli intelligence is trying to confirm Iran’s recent declaration that it has successfully developed a hypersonic ballistic missile, the Israeli Defense Forces have already been anticipating such an announcement — and in the last two months have begun accelerating efforts to develop measures to counter the potential new threat, sources say.

Concerns about hypersonic weapons are not new, and Israel started work some years ago on developing the advanced Arrow-4 interceptor, once it became clear that Iran was working to develop more versions of long-range missiles, including cruise missiles. But once Israeli intelligence confirmed that hypersonic missiles were on the wish list for Iran and assessed that Teheran was trying to get relevant technologies, especially from North Korea, a new push began to counter that threat.

Details on these developments are classified, but sources in the defense ministry say the focus is primarily on helping the local defense industry to develop better early warning sensors and systems that are designed to intercept long-range missiles, including hypersonic ones.

The Missile Defense Directorate in the Israeli Ministry of Defense is coordinating the related projects performed by some Israel defense companies. This is funded mostly with special budgets earmarked for the need to address a very critical threat.

While the Iranian military nuclear program gets the most attention of the Israeli intelligence apparatus, in recent months this country’s achievements in developing long-range ballistic missiles and now hypersonic ones have been made a higher priority.

“Many eyes in the skies watch for every little sign that can indicate the level of threats from these two weapon systems” a senior defense source that is connected to the missile defense operation in Israel told Breaking Defense.

A senior commander of the Islamic Revolution Guards Corps (IRGC) announced last week that Iran has succeeded in developing a hypersonic missile. “The missile has a great velocity and can maneuver both in and out of the Earth’s atmosphere,” Amir Ali Hajizadeh, the IRGC Aerospace Division chief, told reporters.

“The new missile can pass through all missile defense systems, and I don’t think that the technology capable of intercepting it will be achieved in the decades to come. It can target the enemy’s anti-missile systems, and its production marks a huge generational leap in the development of a new generation of missiles,” Hajizadeh stated.

Talking to the Tasnim news agency on Nov. 11, Hajizadeh said the hypersonic missile has been tested. He also said the missile will be unveiled in the future.

Hypersonic weapons can fly at more than five times the speed of sound, and are able to travel on complex trajectories that make them difficult to defend against.

An Israeli expert who talked to Breaking Defense on condition of anonymity said that unlike with ballistic missiles, it is impossible to predict the hit point of a hypersonic missile. That, he added, makes the interception of such missiles more complicated, requiring a mix of interceptors, some that Israel has and others under development.

If it’s real — and aside from Hajizadeh’s statement, there are no signs it is — the weapon would prove a more advanced threat than the Sejil medium-range ballistic missile that is seen as Iran’s first option to strike at Israel. Iran has claimed that the Sejil could reach Tel Aviv in less than seven minutes if launched from the city of Natanz; a hypersonic missile would be able to hit much faster, potentially in the four-minute range.

A Pentagon spokesman told Fox News that the Pentagon is “well aware” of the reporting but claimed it remains “skeptical.”

“As always, we will refrain from disclosure of intelligence reporting and assessments on such sensitive topics,” the spokesman told Fox. “We continue to closely monitor Iran’s development and proliferation of advanced missiles and associated technology.”

Iranian military specialists and technicians have made significant progress in recent years in manufacturing a wide spectrum of indigenous weaponry, allowing the armed forces to be quite self-sufficient in the armament industry.

According to Tal Inbar, an Israeli defense analyst, since Iran already developed a ballistic missile that was declared as “hypersonic” (the “Shahid Haj Qassem”) with a declared reentry speed of Mach 12, and already demonstrated skipping capabilities in several missiles re-entry vehicles, the most plausible assumption is that the new system will be a true Hypersonic Glide Vehicle.

“The assessed hypothesis is that the new missile will have the shape like the known systems of China’s DF-17 or North Korea’s HGV, both hypersonic missiles,” he told Breaking Defense.

Israeli defense sources related to missile defense refused to say whether there is solid evidence that North Korea or China sold Iran technology that would help develop a hypersonic missile.

Inbar says that an HGV is not a “wonder weapon” and it could be intercepted. However, in the near future, it will pose significant challenges for active defenses — both in detection, tracking and kinetic encounter and interception.

“HGV systems challenge most missile defense because it’s hard to detect and track due to their depressed trajectories. Unlike ballistic trajectory, this is an unpredicted flight path. Usually, high maneuverability during reentry,” Inbar explained. Hypersonic weapons would also likely carry a smaller payload than ballistic missiles, he noted.

Israeli defense experts who are following the long-range missile program of Iran say that if the Iranians have really succeeded in developing an operational hypersonic missile they may use the Houthis rebels, their proxy in Yemen, to launch these missiles to hit targets in Israel.

Israeli defense sources said that the potential launch of Iranian-made ballistic or hypersonic missiles from Yemen makes the operational cooperation between the IDF and US troops in the Gulf area, including the US Navy’s Fifth Fleet, “ultra important.”