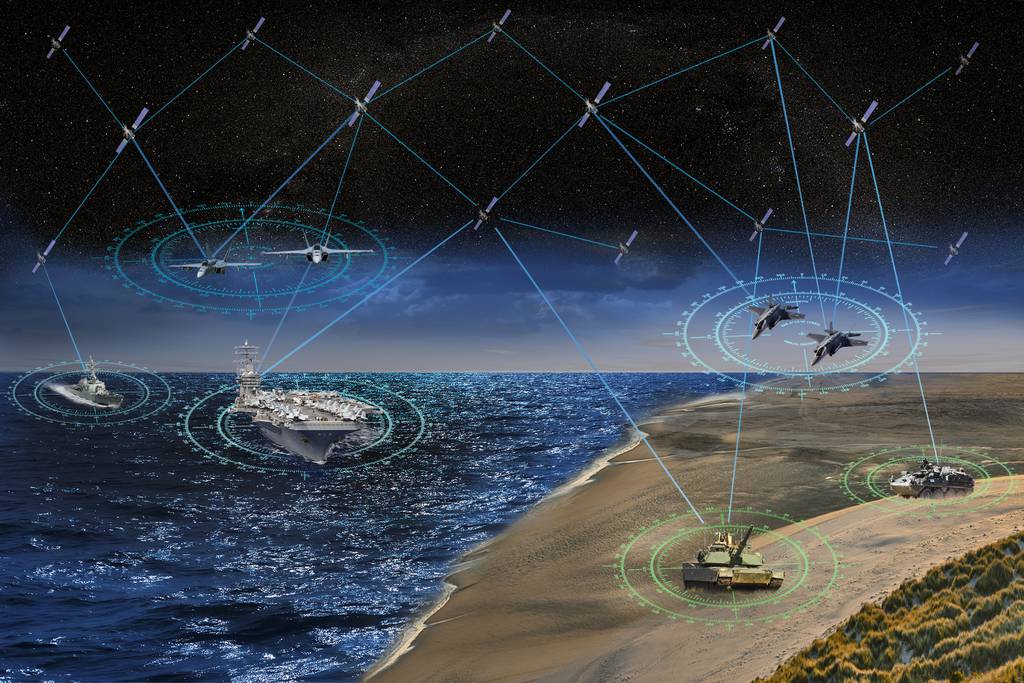 Faced with duplication and delays, DARPA weighs how its proliferated satellite demonstration can still make an impact

WASHINGTON — Project Blackjack started as a bold idea. Instead of relying on a small handful of satellites operating 20,000 miles above Earth, what if the U.S. military could get the same, if not improved, capabilities by using hundreds of small satellites operating less than 1,000 miles up and connected by an orbital mesh network?

The military watched commercial space company SpaceX launch its first Starlink satellites in 2018, promising the low-latency connectivity of consumer broadband delivered to any point on the planet using a proliferated constellation of hundreds, or even thousands, of small satellites in low Earth orbit. These systems promise to make faster connections, bring space-based sensors thousands of miles closer to their targets and cut costs.

The U.S. military is already experimenting with those commercial networks for connectivity at its most hard to reach bases, such as in the Arctic. But Pentagon leadership also wanted a government owned space-based low-latency internet made of dozens of small satellites connecting sensors and weapons all over the globe, completely dedicated to military missions.

It was a potentially revolutionary concept, and the Defense Advanced Research Projects Agency — the Pentagon’s organization devoted to solving the military’s most challenging technological issues — decided to take a stab at it. What emerged was Project Blackjack, an experiment of about 20 small satellites that could demonstrate the utility of a proliferated constellation to the military.

Since then, however, the situation has rapidly changed. Without waiting to see DARPA’s demonstration, the Defense Department bought into the proliferated LEO concept and established the Space Development Agency to set one up. And the newly minted U.S. Space Force has touted the need for a hybrid network, with capabilities spread out across multiple orbits — including LEO.

It seems like the Pentagon has already adopted DARPA’s revolutionary concept and left its demonstration in the dust. Faced with duplication and delays, is Project Blackjack still relevant?

“That’s a question we wrestle with everyday, right? We always are evaluating — are we still relevant? — just like at every DARPA program. Are we hitting our technical milestones? Are the technical milestones still making an impact?” DARPA Project Manager Stephen Forbes said. “I think honestly the answer is ‘yes.’ ”

Project Blackjack may not have a direct impact on the first few batches of satellites launched by the Space Development Agency, but Forbes is confident his program will inform the military’s future proliferated LEO efforts. In the near-term, the agency’s risk reduction experiments have demonstrated critical technologies needed for an orbital mesh network, while its efforts to work through a contracted supply chain will help those who come after, said Forbes. And thanks to the SDA’s spiral development approach, the lessons learned from Project Blackjack could be incorporated in later tranches of satellites.

DARPA and the Space Development Agency

Like all DARPA projects, Blackjack was never supposed to be an operational platform. Rather, it’s an effort to develop and demonstrate new technologies for use by another agency or an armed service. Technology from successful DARPA programs can be used to launch or contribute to a program of record.

The path to an operational program for Project Blackjack, however, is muddied. The most obvious operational successorwill be the Space Development Agency’s National Defense Space Architecture. But the timeline is inverted: The SDA will launch its first tranche of satellites before DARPA.

Project Blackjack will not directly affect that first batch of SDA satellites, but it could impact subsequent generations. That’s because SDA is using a spiral development approach, bolstering its constellation with new launches every two years. DARPA’s experiment could yield fruit for later tranches of satellites, likely those going into orbit in 2026 and 2028.

“We’re not directly changing what SDA is doing on tranche 0 or tranche 1, but as they move into their operational tranches, the lessons learned from Blackjack on command and control, data management, data processing at the edge, adding high-performance computing at the edge, all naturally allow them to roll in,” Forbes said.

More immediately, DARPA has partnered with the SDA and others to launch a handful of experimental satellites to reduce risk for Project Blackjack and other proliferated LEO constellations. Those satellites are testing out some of the core technologies needed to make an on-orbit mesh network work.

The first of these experiments — dubbed Mandrake I — launched in January 2021. That cubesat has already lived out its expectedly short life span, demonstrating high-end computing on orbit.

“That was very, very successful. It was something on the order of less than nine months from contracting to satellite on orbit. So a really accelerated turnaround, and all chips that were flown worked really, really well — far better than anticipated on orbit,” Forbes said. “We basically hit every one of our objectives that we wanted to with the vehicle.”

That risk-reduction experiment gave DARPA and its partners more confidence that they could depend on those chips for missions. Another experiment — Mandrake II — was supposed to go up simultaneously, but it was delayed six months due to an accident at the facility where it was to be integrated with the rocket. It eventually launched in June, placing the microsatellite in orbit where DARPA is using it to test out its optical laser communications concept that will enable the on-orbit mesh network.

“We’re still working through a lot of the issues on the laser platforms, and it’s fundamentally proving out that trying to start them early has burned down a lot of risk on the program,” Forbes said.

The Mandrake II experiment has experienced its share of issues, some of which Forbes blamed on the decision to rely on commercial off-the-shelf parts. The use of COTS parts was expected to lower the cost of the satellites and allow the government to build them faster.

“When you’re working with COTS, things will glitch and you have to fix them,” Forbes said.

The experiments were held back by the agency’s limited ability to downlink data, he added. It’s common to have a limited connection with an experiment like this, but it’s just one more factor dragging out the project’s timeline. For example, it may take only two hours to run an experiment on the satellites, said Forbes, but it may take a week to download all the data from that experiment.

Despite the delays, the risk-reduction experiments have improved the main satellites, said Forbes. Based on lessons learned from Mandrake I, DARPA switched out the primary high-performance computing chips for ones better suited for the long-term space environment. DARPA also learned from other investments in radiation testing that some of the supporting electronics were unlikely to survive for a full two years on orbit, so those were also switched out.

The agency also changed out its laser acquisition software and made mechanical changes to the optical head based on lessons learned from Mandrake II. Smaller issues, such as the location of certain mounts on the bus, were not a huge impediment to launching a couple satellites, but would have become a bigger headache as the agency scaled up to its full constellation, said Forbes.

One goal of Project Blackjack was to build the satellites with COTS parts, reducing costs and enabling faster builds by leveraging the commercial world. However, the COVID-19 pandemic harmed the supply chain in such a way that rendered many of the promised benefits moot.

“I’m not seeing the advantage I expected, but it’s not because of the choice. It’s because the supply chain has eliminated our ability to normally make the changes the commercial world would make. It doesn’t matter who you are; if you can only get one part, then you have to use that one part,” Forbes said.

For example, if one resistor supplier is facing a shortage, DARPA should be able to turn to another supplier. However, many resistor suppliers rely on a few common locations for parts. If one of those areas undergoes a four-week lockdown due to COVID-19, for example, that ripples through all of the suppliers, Forbes noted.

So instead of being able to fully focus on the technical aspects of Project Blackjack, Forbes’ team has to devote significant time and effort to getting necessary materials.

“I am so frustrated that I’m tracking capacitors and resistors and things like that,” said Forbes, adding that commodity items he could normally “buy by the reel for a penny a pop” are now difficult to obtain, which slows progress.

And with limited replacement options, not every hardware replacement is a like-for-like substitution that can be plugged into the end product.

The consequence? Software designed for a specific piece of hardware may not be perfectly compatible with a substitute, forcing software designers to scrap huge chunks of code and start over, said Forbes.

He said he hopes the current supply chain woes are temporary and that relying on COTS parts will prove beneficial. “It’s an opportunity that’s still waiting to be explored” once the supply chain normalizes.

As DARPA finishes experimenting on its risk-reduction satellites, it’s preparing to launch the first completed satellites of Project Blackjack.

“We’re in the throes of building hardware for our buses and our payloads,” Forbes said.

The first batch of satellites to go up in October will further prove out the on-orbit connections that are at the core of Project Blackjack and other orbital networks. DARPA will use those initial satellites to work through the bugs and kinks of its constellation, ensuring the second batch launched six months later will operate seamlessly.

And in April, the second batch of satellites will be delivered into orbit. Dropped off at 500 to 550 kilometers above the Earth’s surface, they’ll then climb to about 1,000 kilometers. That will take months.

“But once we’re there, we really want to demonstrate the ability of the satellites to share the data across them, work collaboratively along the missions, because that’s really what you have to do at LEO to provide the same sort of always-on capability that one would get from a [geostationary] satellite,” Forbes said.

“If we’re able to successfully do that, then we will be a very, very successful program and really help [Space Systems Command], SDA, [the Missile Defense Agency], whoever else wants to use proliferated LEO for their missions — really give them a solid foundation on which to build.”