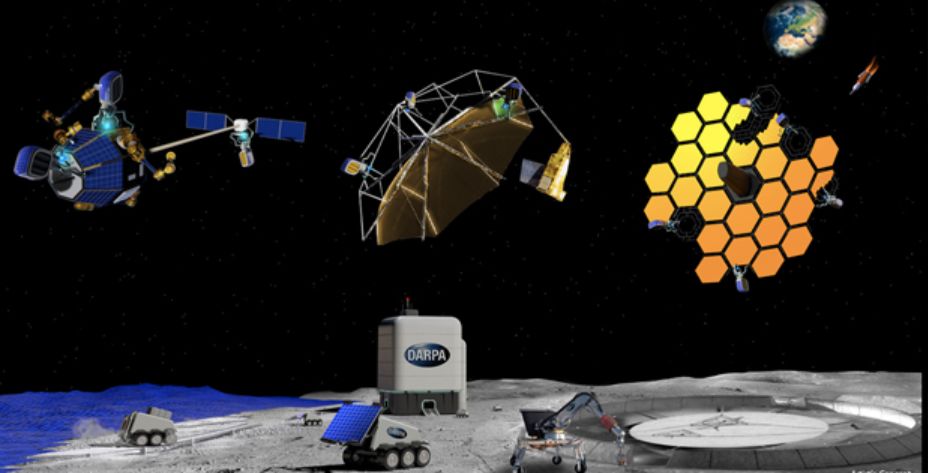 “As you surely know, there is a lot of emotion in this on both sides of the argument, making it as much political as it is legal,” said attorney Henry Hertzfeld of the DARPA plans.

WASHINGTON: DARPA’s new project to research and develop novel materials and processes for manufacturing in space — in particular on the Moon — is stirring a legal and political dust storm about what DoD can and cannot do in cislunar space under the Outer Space Treaty.

“From an international perspective, DARPA doing anything on the Moon looks bad. It raises suspicions about the intentions of the U.S. space program there, and rightfully so,” Jessica West, senior researcher at Canada’s Project Ploughshares and managing editor of the widely-respected Space Security Index project, said in an email yesterday.

“I really, really hope there’s some miscommunication here and the DoD is not actually planning on building illegal military bases on the Moon,” tweeted Secure World Foundation’s Brian Weeden.

“There’s a little bit of Internet traffic on Twitter … about whether or not this abrogates the OST. And, certainly, we’re firmly of the belief that it does not,” Jared Adams, DARPA spokesperson, told Breaking D.

Instead of building lunar factories, he and NOM4D (pronounced NOMAD) program manager Bill Carter explained in an interview, the project is an exploratory effort by DARPA’s Defense Science Office to study the potential for better capabilities to build dual-use space infrastructure, such as communications antennas and solar power arrays. (The Defense Science Office is the fundamental research arm of DARPA — itself DoD’s futuristic R&D shop that looks at emerging tech challenges, including some DoD doesn’t even know it might have.)

Such on-orbit subsystems on satellites are, by necessity, large and delicate, and a major challenge to successfully launch from Earth. And, for any operations in cislunar space (between the Earth’s outer orbit and around the Moon), they need to be even bigger and more complex than those currently used by commercial, civil and military actors.

“The farther out you go, if I want to have the same ability to communicate, say, with a reflector antenna, you have to be twice as big,” Carter said.

Of key interest, he added, is the potential for using the rocky lunar soil, known as regolith, as a potential raw material for on-orbit manufacturing.

“One of the things we don’t know right now is: what are the capabilities of materials that I extract from regolith as they apply to things that I just talked about, reflective surfaces and so forth?” Carter elaborated. “That could be important for Earth observation or situation awareness, all those things. We don’t know, there’s never been a rigorous engineering analysis.”

In addition, he explained, the project will study novel Earth-produced materials that could be easily and cheaply launched and then used for on-orbit construction, for example, via 3D printing; as well as new system designs and  innovative space-based manufacturing processes.

The current DARPA plan is to hold an industry day on Feb. 26, Carter said, followed by a formal request for proposals (RFP) for studies, including tech demos — with responses to come some 60 days later. DARPA will then need to review the proposals, and issue contracts to the winners — a process that likely will take six months or more. But he did not provide an exact schedule or budget.

Carter, a materials scientist himself with an obvious passion for his subject matter, seemed slightly baffled by the fact that the effort might spark a legal and/or political backlash. “I guess I get the concern,” he said, but stressed that the project has nothing to do with building military bases or factories on the Moon.

“It’s a materials science program. We’re going to be doing stuff on the ground — we actually don’t have any plans to launch anything. We’re doing work in laboratories and so forth,” Carter said. The focus is “on scalable solar, scalable RF, scalable optical systems — a wide range of very, very important uses, some of them are military, some of them are not.”

The 1967 OST, signed by 133 countries including the US, Russia and China, governs all activities in outer space. Article IV puts restraints on certain military operations. These include a ban on military facilities, bases or maneuvers on the Moon or other celestial bodies.

That said, military personnel are allowed to participate in “peaceful” scientific endeavors. (Remember, the treaty was based on an agreement in the early 1960s between the Soviet Union and the United States, at a time when both superpower space programs were largely run by their respective militaries.)

“One absolute is, no military bases on the Moon or other celestial bodies. The treaties do allow for military personnel on the Moon, but only for R&D and scientific purposes,” said Henry Hertzfeld, director of the Space Policy Institute at George Washington University.

That latter clause would imply that the NOM4D effort — as well as other DoD cislunar projects such as Air Force Research Laboratory’s Cislunar Highway Patrol System (CHPS) satellite to demo space situational awareness capabilities around the Moon — are fully compliant within the OST.

Things get a lot murkier from there, however, especially regarding any future DoD funding of private company activities on orbit or on the Moon.

“It seems a bit unclear what exactly is being proposed [under NOM4D],” Chris Johnson, legal counsel at the Secure World Foundation said in an email. “However, the second paragraph of Article IV of the OST is sufficiently clear to give some legal context to this proposal.

“If DARPA (or its contractors) are conducting activities on the Moon which are temporarily peaceful in nature (like refining in situ resources into fuel or other useful material), this is still a MILITARY activity, and therefore pretty clearly prohibited,” he elaborated. “It’s not done under the banner of NASA, or part of an Artemis program with international partners, or any principally civil activity — it’s just the US military conducting activities, with military aims and objectives in mind. On the surface of the Moon, this is strictly proscribed and prohibited.”

Tanja Masson-Zwaan, a well-known space lawyer who is deputy director of the International Institute of Air and Space Law at Leiden University in the Netherlands, agreed. “Indeed, I would think this is contrary to Art. IV.2” of the OST.

However, Hertzfeld said a legal argument could be made that such activity is in compliance with the OST and other international treaties.

“It appears that most of what they are looking at are telecom-type activities. So, just as with using satellites for military telecom purposes, it could be argued this is within the treaties, even in support of weapons,” he said. (Think US spy satellites that track movements of adversary vehicles and troops, and map military facilities, for use in wartime targeting.)

“And note that the treaties are careful — they do not outlaw (all) weapons in space, only nukes,” Hertzfeld added. “Also, it depends on how one interprets the ‘peaceful purposes’ clauses. I’m not trying to justify these DOD activities since it is a real slippery slope, but just to anticipate how some may argue that it is not a violation of our obligations under the treaties.”

Johnson agreed that such arguments are likely to be put forth should DoD ever get to the place where it is funding cislunar manufacturing ventures, but said he did not believe they hold water.

“Yes, it may be possible for someone to offer a tortured argument as to how this is not explicitly illegal — either through de-linking the activity from the US military through intermediaries, or separating activities from the lunar surface and surrounding deep space, or painting the military activity as peaceful in nature,” he said.  “Such justifications are certain to be offered. But, I would not be buying it.”

While everyone knows the old adage about always being able to find a lawyer to agree with you, legal niceties are not the only questions at stake. There also are a host of policy questions surrounding the DARPA project and DoD cislunar ambitions writ large.

One of the underlying policy questions, experts said, is why DoD — and not NASA or the Commerce Department — is even thinking about supporting commercial providers to build mining and manufacturing facilities in deep space.

Carter explained that the big difference is that NASA is focused on human exploration and associated capabilities, whereas the DARPA effort is centered on robotic capabilities. “We’re talking about what’s going to be needed for a truly robotic mission to be able to do this. So there’s a lot of overlap with NASA and the commercial space,” he said, but “in general, they’re not looking at this manufacturing piece for very large extended structures.”

DoD further has been seeking to expand its industrial base writ large by bringing in non-traditional commercial companies with innovative tech and seeking to ‘prime’ dual-use markets — efforts pioneered in many ways by former Air Force acquisition czar Will Roper.

But space comes with both different political considerations because of its legal status as a global domain that belongs to no nation, like the high seas, experts stress.

“As you surely know, there is a lot of emotion in this on both sides of the argument, making it as much political as it is legal. Do we want to open up Pandora’s box or not?” Hertzfeld said.

For example, several sources said the DARPA effort could actually undermine NASA’s goal of building a coalition of countries to develop lunar commerce via the Artemis Accords.

“This is particularly tone deaf at a time when NASA is seeking to build international support for the Artemis Accords to guide civil activities on the Moon. A key point of these principles is that they are rooted in the Outer Space Treaty, which specifically bans military installations,” West said. “While there are no doubt loopholes in the letter of the law, I don’t see how disregard for its spirit is helpful here.”

“What states will now be eager to join the Artemis Accords, or participate in Gateway or various other international projects, when there are rumors and notions that the US wants to send its military to the Moon?,” Johnson said. “Just like the NASA-Space Force agreement last year, this is unnecessarily provocative and the US can do better, with purely civil development of these technologies and industries, and for purely civil & commercial purposes.”

“Blurring of civil, military, and commercial capabilities and intentions in space is exactly what the U.S. accuses other countries such as China of doing,” West explained. “It doesn’t build trust, and it doesn’t build confidence. And these two qualities are already in short supply. I don’t see how this ends well.”