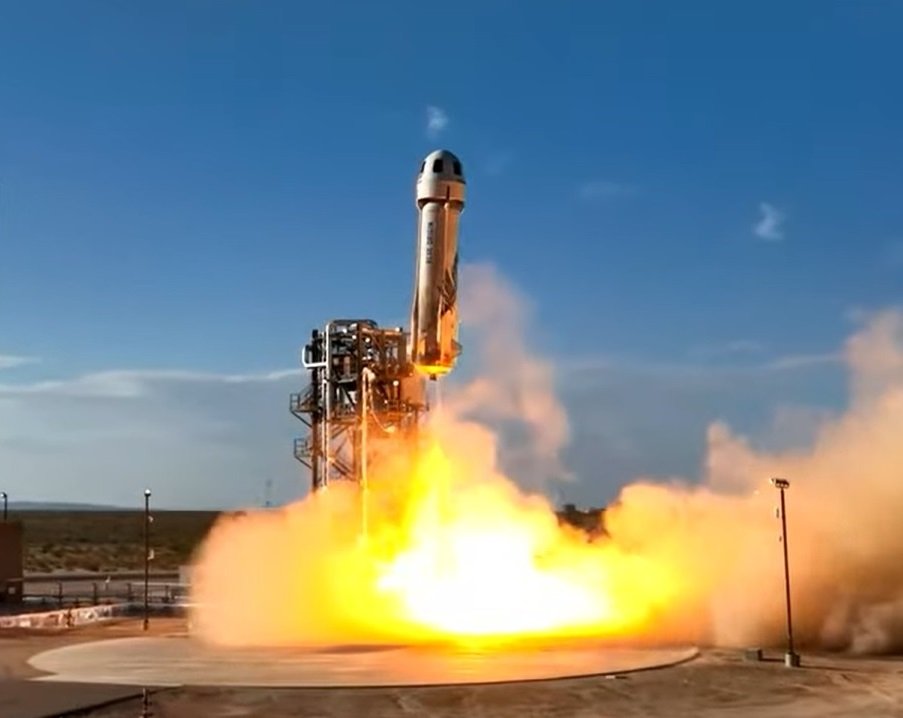 In addition to the firsts, there was a “second”: the first Blue Origin customer to take a repeat trip to space.

The New Shepard spaceship lifted off from Blue Origin’s Launch Site One in West Texas at 8:26 a.m. CT (6:26 a.m. PT), sending the crew to a maximum altitude of 66.5 miles (107 kilometers) above sea level — beyond the 100-kilometer Karman Line that marks the internationally accepted boundary of outer space.

While New Shepard’s reusable booster flew itself back to a landing pad, the crew enjoyed a few minutes of weightlessness and an astronaut’s-eye view of Earth. Just a little more than 10 minutes after launch, New Shepard’s crew capsule made a parachute-aided landing amid the Texas rangeland.

Blue Origin’s flights tend to feature historical angles — starting with the first crewed flight, which took place on the 52nd anniversary of the Apollo 11 moon landing. In the run-up to today’s flight, Apollo 16 astronaut Charlie Duke delivered a message to the spacefliers from Mission Control.

“Godspeed,” Duke told them. “I know you’re going to have an exciting adventure, just as I did 50 years ago.”

Katya Echazarreta, an electrical engineer who’s the co-host of the YouTube series “Netflix IRL,” made a bit of history as the first woman spaceflier born in Mexico. She’s also the first person to fly courtesy of Space for Humanity, a philanthropic venture that sponsors worthy individuals for spaceflights.

Before launch, Echazarreta recorded an inspirational message in Spanish. “I want to dedicate this flight to space to my country, and to the entire Latin American community,” she said. “My wish is that you see this mission, believe in yourself, and know that you can be the next one.”

After the mission, Echazarreta said she was overwhelmed by the experience of seeing Earth from far above. “Even now, just thinking back makes my eyes teary,” she told reporters. “As soon as I looked at our planet, I had just a single tear running down my face.”

Echazaretta — whose flight was sponsored by donors including Dylan Taylor, the founder of Space for Humanity and a Blue Origin spaceflier himself — said she now felt an obligation to pay it forward.

“Growing up, one of the things I would hear the most was that this dream was not realistic, and that it wasn’t for people like us,” she said. “So I think my priority going forward is going to be to have other people have this experience. And if I can go with them, then great.”

Another crew member, Victor Correa Hespanha, became the second Brazilian to fly in space and the first “cryptonaut.” His seat was sponsored by the Crypto Space Agency, which is funded entirely by the NFT community through mint proceeds. Hespanha won the trip in a lottery.

“Happiest day of my life,” Hespanha said after the flight.

The view changes you. #NS21 pic.twitter.com/3gWo5yjDlM

This was the second go-round for Evan Dick, an investor at Dick Holdings LLC who’s also an airplane pilot and avid sailor. Dick was one of the crew members for last December’s NS-19 mission, flying alongside the daughter of pioneering Mercury astronaut Alan Shepard.

Dick said it’s difficult to explain why he decided to take a second space trip to people who haven’t had the experience themselves. “Once you see it for yourself, you want to go again, you want to go for longer,” he said. “And so it was like an obvious thing.”

Rounding out the six-person crew was Hamish Harding, chairman of Action Aviation; Jaison Robinson, the founder of a commercial real-estate company called JJM Investments and a co-founder of Dream Variations Ventures; and Victor Vescovo, co-founder of Insight Equity, a private equity investment firm.

After last July’s first crewed flight, Bezos said that Blue Origin had enough inquiries to support nearly $100 million in ticket sales, and the company has said that it plans to pick up the pace this year for its suborbital launches.

Unlike Virgin Galactic, which has publicized a $450,000 price tag for its suborbital space trips, Blue Origin negotiates its ticket prices privately and doesn’t disclose how much its customers are paying.