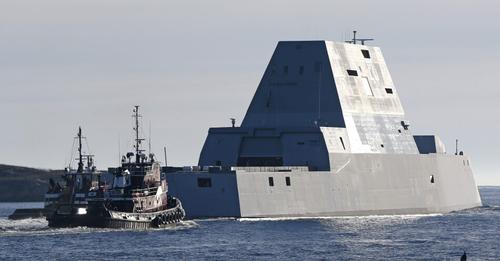 Bath Iron Works was chosen to build all three Zumwalt-class destroyers, the last of which is still under construction at the Bath shipyard.

Zumwalt-class destroyers, three ships built exclusively by Bath Iron Works, will be the first ships in the Navy to be outfitted with new hypersonic missiles, the Navy’s senior military officer confirmed earlier this week during a visit to the Bath shipyard.

“With respect to Zumwalts, they’re the first ships in the Navy that we’ll outfit with hypersonic missiles,” said Chief of Naval Operations Adm. Mike Gilday. “The future of those ships is extremely bright, and I know the Chinese are very concerned about the Zumwalt-class destroyers.”

“We have a goal, in law, of building 350 ships,” Collins said while visiting BIW with Gilday on Monday. “The Chinese are closer to our goal than we are so it’s so important that we have an adequate budget so that we can continue ensuring we have the best naval fleet in the world.”

According to a Congressional Research Service report published last month, hypersonic weapons “can maneuver en route to their destination,” and can fly at speeds of Mach 5, or about 3,800 mph.

This capability makes them an attractive choice for the military for “responsive, long-range, strike options against distant, defended, and/or time-critical threats [such as road-mobile missiles] when other forces are unavailable, denied access, or not preferred,” said Vice Chairman of the Joint Chiefs of Staff and former Commander of U.S. Strategic Command Gen. John Hyten.

The weapons were first expected to be added to submarines, but Gilday announced the Department of Defense switched the plan to Zumwalts during an April 29 Center for Strategic and Budgetary Assessments webinar.

“Our biggest (research and development) effort is in hypersonics, to deliver that capability in 2025, first on surface ships and then – and then on Block V submarines,” said Gilday. “Fielding hypersonics in the Zumwalt-class destroyers will be an important move forward, to turn that into a strike platform.”

The Zumwalt-class destroyer is more expensive and advanced than the Arleigh Burke-class destroyer, which BIW typically makes for the Navy. The more than $4 billion ship features a sleek, wave-piercing tumblehome design, making the 610-foot destroyer appear much smaller on radar than it actually is. It features an electric propulsion system and new types of weapons.

The Zumwalts are a far cry from the roughly $1.8 billion Arleigh Burke-class destroyer, which BIW has produced over 30 of since the 1990s.

Being the first in the Navy to carry hypersonic missiles would be a step forward for the Zumwalts, which have a tumultuous history.

In the early 2000s, the Navy proposed building 32 highly advanced Zumwalt stealth destroyers at BIW, giving the shipyard years of work to come. But as the years wore on, the number of ships ordered was slashed repeatedly. Ultimately, the Navy ordered just three Zumwalt-class destroyers, the last of which, the future USS Lyndon B. Johnson, is under construction at the Bath shipyard.

First of three Zumwalt-class destroyers, the USS Zumwalt was officially handed over to the Navy in April 2020.

In October 2020, then-National Security Advisor Robert O’Brien announced the Navy would eventually add hypersonic missiles to all destroyers, including Bath-built Zumwalts and Arleigh Burke-class destroyers, during a visit to the Portsmouth Naval Shipyard in Kittery, Defense News reported.

“The Navy’s Conventional Prompt Strike program will provide hypersonic missile capability to hold targets at risk from longer ranges,” O’Brien said. “This capability will be deployed first on our newer Virginia-class submarines and the Zumwalt-class destroyers. Eventually, all three flights of the Arleigh Burke-class destroyers will field this capability.”