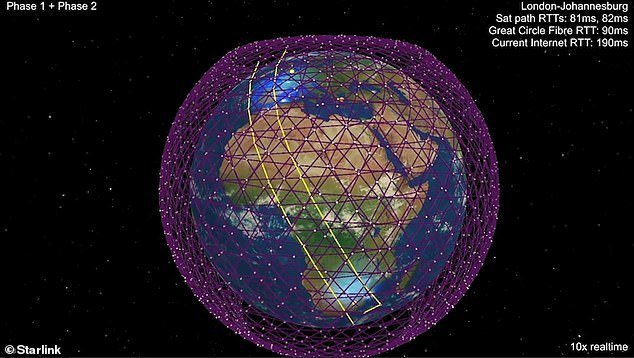 COLORADO SPRINGS — SpaceX is adding laser terminals on all future Starlink satellites and is the reason behind a break in launches for the broadband megaconstellation, president and chief operating officer Gwynne Shotwell said.

Shotwell told the Space Symposium Aug. 24 that its decision to add laser crosslinks, enabling the satellites to communicate with each other to reduce their reliance on ground stations, is “why we have been struggling” to launch a Starlink mission since June 30.

SpaceX had been conducting an aggressive launch campaign with its Falcon 9 rocket throughout the first half 2021 before the hiatus, enlarging the Starlink constellation to more than 1,600 satellites in low Earth orbit.

Typically, each Falcon 9 launch for the network has placed 60 Starlink satellites at a time. There were four Starlink launch missions this May alone.

SpaceX has regulatory permission to operate 4,408 satellites at 550-kilometers altitude for global coverage.

Shotwell said the next Starlink launch will be in “roughly three weeks.”

SpaceX launched 10 Starlink satellites with laser crosslinks to polar orbit in January, its first with the capability, so it did not need ground stations over the poles.

By enabling communications from one satellite to another on the same or adjacent orbital plane, a ground station does not have to be in the same satellite footprint as user terminals.

The price of user terminals remains a challenge for SpaceX, which is heavily subsidizing them.

Shotwell told the conference that SpaceX continues to lose money on user terminals with every customer it acquires, because their cost is higher than the average user can afford.

“We were able to tackle almost all of the elements of the cost before we rolled out service, with the exception of the user terminal,” she said.

She said the company is on track to reduce the cost of its user terminals, which are priced to consumers at $499, by roughly half before the end of this year.

“And then we think we’ll be able to cut that in half yet again,” she added.

However, she pointed to a global lack of semiconductors that has “delayed the new user terminals,” and a shortage of liquid oxygen that is posing other challenges for the launch side of its business.