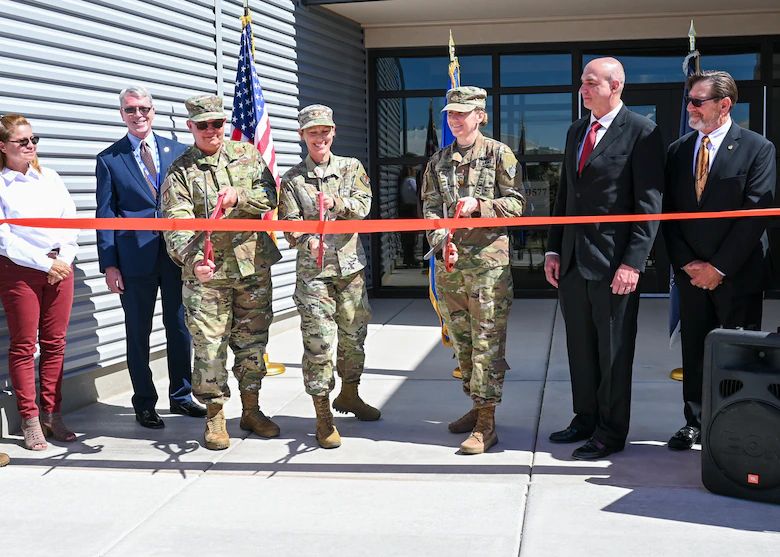 The SWORD Lab is a 26,000 square foot, $12.8 million state-of-the-art facility, with office and laboratory space that will house the 65 scientists, engineers and support staff of the directorate’s Space Control Branch to better integrate R and D programs focused on improving space warfighting capabilities.

“One of the reasons we stood up the U.S. Space Force was to ensure our nation has the capabilities to deter any threats in space,” said Felt. “Our job in the SWORD lab will be to continue to develop resilient and innovative technologies that will protect our nation and allies from threats by our adversaries. Recognizing that space is an emerging domain for warfighting, we want to make sure there is never a war in space.”

Felt explained that he likes to think of the work AFRL will accomplish in the SWORD lab through three lenses.

“First there is the research that our scientists and engineers will be performing,” Felt said. “We will be tracking objects in the space domain to monitor and safeguard freedom of action from near Earth orbit to beyond geosynchronous orbit, which is becoming more and more challenging as the number of satellites increase. We will also invest in technologies to increase the resistance of satellite systems to cyber attacks, and we will be working in the area of autonomy to enable space systems to automatically detect and respond to threat conditions faster than a human operator could achieve.”

Felt continued, saying that another lens is the “secret sauce” of the lab – the scientists, engineers, and functional experts who conduct some “in house” hands-on research, in addition to awarding contracts to industry. He said they need this modern laboratory to continue their successes. The final lens Felt mentioned is the partnerships AFRL has with industry, business and academia that would continue in the new collaborative space.

“This is a laboratory for the nation, for AFRL and the Air and Space Forces where new partnerships will be enabled,” Felt said. “We want to bring people together to ensure we will continue to deliver innovation to the nation.”

The ribbon cutting ceremony was a milestone occasion for Pringle who was making her first visit to her two technical units located on Kirtland, the Space Vehicles and Directed Energy Directorates. Pringle took command of AFRL, headquartered at Wright-Patterson AFB, Ohio, in June 2020. Her visit to New Mexico was also a homecoming for the AFRL leader who had served as the base’s 377th Air Base Wing vice commander from May 2013 – May 2014.

“It’s wonderful to be in New Mexico again and what a great occasion,” Pringle said. “Our sword is sharp and we are ready to go. Our flag still flies, and it is great to see so many faces, as we’ve emerged out of COVID.”

Pringle complimented the AFRL visionaries who began the planning for the SWORD laboratory 20 years ago. She congratulated the in-house research team, the Army Corps of Engineers and the design-build teams for their dedication to seeing the SWORD project to completion. In addition, Pringle thanked the City of Albuquerque distinguished guests and the New Mexico U.S. congressional field representatives for attending the ceremony.

“What happens next, Pringle continued, is we’ll have our AFRL researchers, students and industry working side by side thinking of new ways to benefit our Space warfighters to get our most important technologies out the door to support them. I am very excited to be a part of this SWORD lab.”