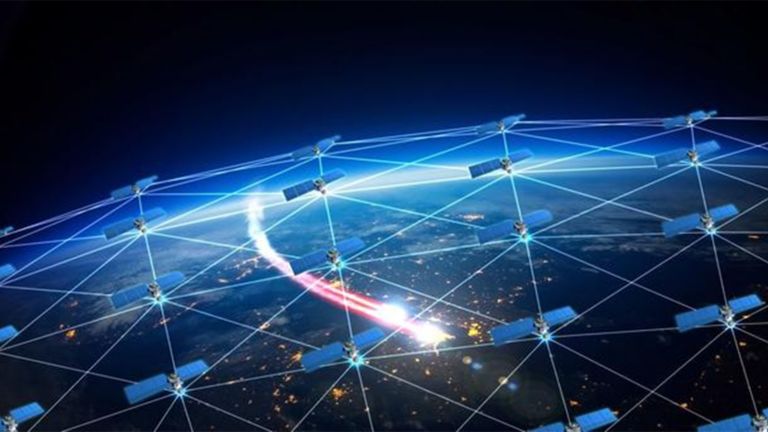 WASHINGTON: Under a new program to be initiated in fiscal 2023, the Space Force will develop an “initial” constellation of new satellites in Medium Earth Orbit (MEO) to detect and track hypersonic missiles, according to the service’s budget books.

Space Systems Command (SSC) has budgeted some $828 million from FY23 through FY27 for the effort, aimed at developing at least four satellites to provide an “initial warfighting capability” by 2028, according to the budget justification books, or j-books, released Friday.

“Initial Warfighting Capability is comprised of validating through on-orbit measurements the ability for regional tracking, mission management and control, and coordinated regional warning and access,” the documents explain. “After performance validation is complete, prototype sensors will feed data directly to operational warning and defense systems. The initial warfighting capability will provide: sensitivity to detect emerging threats; accurate tracking to contain maneuvering targets, and deliver data within the required latency to close the kill-chain solution.”

SSC plans to issue follow-on contracts to launch development in December, although budget documents do not specify whether one or more contractors will be chosen.

Under the TCD study, SSC contracted Raytheon and Millennium Space Systems last May to develop what are in essence computer-simulated prototypes, with Raytheon receiving $29 million and Millennium Space receiving $28.1 million. The two companies are under contract to each deliver by November 2022 a “high-fidelity digital model” to allow the Space Force to undertake what amounts to early orbital testing on the ground.

The decision to go ahead with a MEO development program was signed off by the Space Acquisition Council on Jan. 27, based on the “force design” created by the Space Warfighting Analysis Center that determined a multi-layered network of satellites in Geosynchronous Orbit (GEO), highly-elliptical polar orbit, Low Earth Orbit (LEO) and MEO is necessary to provide comprehensive ballistic and hypersonic missile warning and tracking.

The idea is that the ground system for the new MEO constellation will be integrated with the LEO satellite constellation optimized for hypersonic missile tracking that’s currently being developed by the Space Development Agency (SDA) in partnership with the Missile Defense Agency under the “Resilient Missile Warning/Missile Tracking – Low Earth Orbit (LEO)” program.

SDA will transfer to the Space Force in October, although it will retain a semi-independent status. Thus, its budget portfolio has now been transferred from the Defense Department-wide budget to the service’s. Space Force has requested nearly $500 million in FY23 for what SDA calls Tranche 1 of the Tracking Layer of its planned National Defense Space Architecture. That architecture will comprise large constellations of small satellites optimized for six different missions, plus a ground layer. (Unlike for the other missile warning/tracking programs, the budget books do not provide budget estimates for the Tracking Layer through FY27.)

In turn, those MEO and LEO missile warning/missile tracking satellites are eventually to be integrated via their ground systems with SSC’s flagship missile warning program, the Next Generation Overhead Persistent Infrared System (Next-Gen OPIR). The Next-Gen OPIR development program is being developed to replace the current Space Based Infrared System (SBIRS) satellites.

Space Force asked for a whopping sum of nearly $3.5 billion for the Next-Gen OPIR program in its FY23 Research, Development, Test and Evaluation (RTD&E) budget request, covering development of advanced technologies, the two types of satellites, ground systems, and integration. Between FY23 and FY27, the service is budgeting nigh on $12 billion for the program.

SSC currently has contracted for its first iteration of the satellite segment, confusingly called Block 0, that is composed of three satellites in GEO being built by Lockheed Martin, and two satellites in LEO polar orbits, being built by Northrop Grumman. SMC at the moment plans to launch the first Next-Gen OPIR GEO satellite (called NGG for Next Generation Geosynchronous) in 2025 or 2026, and to have the entire constellation on orbit by 2029.