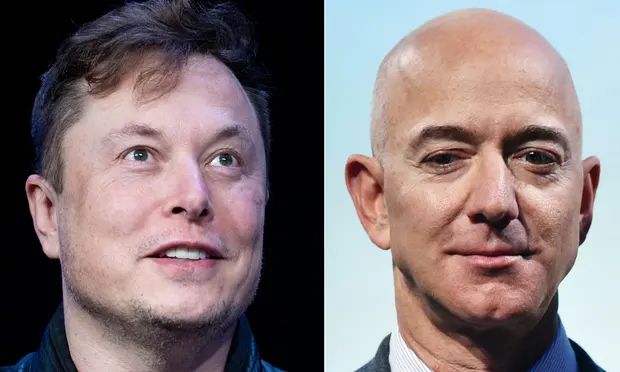 As Amazon founder prepares to jet off in his Blue Origin vessel, can he compete with Elon Musk’s SpaceX?

Every billionaire needs something to spend their fortunes on. For Howard Hughes, it was the Spruce Goose; for Roman Abramovich, it’s Chelsea FC. And for the current crop of tech moguls, it’s space.

Jeff Bezos has led the charge. He founded his company, Blue Origin, in 2000, after a conversation with his friend, the science fiction author Neal Stephenson. And in July, 21 years later, the investment will pay off: Bezos will blast himself, his brother, and a third fee-paying guest 100km up in the company’s New Shepard rocket, brushing the edge of space until he comes back down to earth three minutes later.

But despite Bezos being the first tech billionaire to decide he should own a spaceflight company – and the first to taste the main perk of that ownership – Blue Origin is a distant second in the public eye to SpaceX, Elon Musk’s hobby turned business.

While Blue Origin was founded 21 years ago, the company operated largely under the radar until 2015, when it began testing the New Shepard. SpaceX, meanwhile, was big and noisy from day one. Within six years of its foundation in 2002, it had launched the first privately funded liquid-propellant rocket into orbit, Falcon One.

From there, the firsts kept coming: first private mission to the ISS, first vertical landing for an orbital rocket, and first company to send astronauts into orbit. Now, 19 years in, SpaceX is a mature business, pulling in $2bn a year of revenue. Like Blue Origin, it has focused investment on reusable rockets, which greatly reduce costs, and the two companies are now bitter competitors for the government contracts that represent an enormous chunk of spaceflight revenues.

Taking a very different approach is Richard Branson’s Virgin Galactic, founded in 2004. It hopes to create and capitalise on the space tourism industry, flying sightseers onboard the SpaceShipTwo space plane. It was the first private spaceflight effort to achieve widespread attention, thanks to Branson’s claims it would send its first tourists into space in 2009, but years of delays – and the death of a test pilot in 2014 – have led some to wonder if it will ever live up to those promises.

Of course, you don’t have to buy the spaceship to go into space, and Google’s Sergey Brin skipped the middleman, investing $4.5m in Space Adventures in 2008. The company is now planning to bring tourists up to the ISS, in partnership with SpaceX, and Brin’s investment – which also served as a deposit for a seat on the mission – is looking like quite good value: tickets for the SpaceX trips are likely to be about 10 times that.

However, all the billionaires were beaten to the punch by Mark Shuttleworth, the Anglo-South African entrepreneur behind the Ubuntu operating system. Shuttleworth, with a still-respectable net worth of £500m, simply bought a ticket on a Soyuz rocket to the ISS in 2002, spending 10 days in orbit as the second ever space tourist.