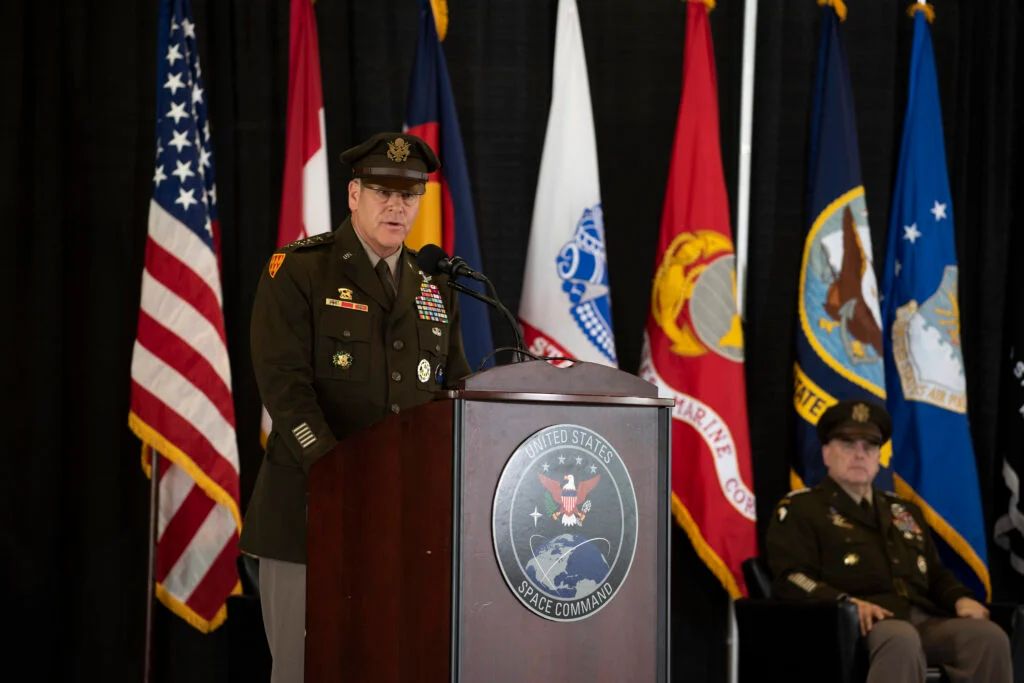 We must have fully integrated offensive and defensive operations across all of our services, as well as our partners,” says Army Gen. James Dickinson, SPACECOM commander.

UPDATED TO INCLUDE LINK TO THE  VISION DOCUMENT. WASHINGTON: In his new Commander’s Vision, the head of Space Command says leading the fight to prevent adversaries from disabling or destroying US space assets is his new focus.

“The intended audience is both internal and external,” Army Gen. James Dickinson told me in an interview yesterday. “Internally, the objective is to set the stage for SPACECOM personnel to develop and sustain a warfighting mindset necessary for our mission challenges in this new warfighting domain.”

Key to the vision is achieving “space superiority” — a loaded term to the public and US allies, but in military parlance ‘superiority’ simply means being able to use the domain and keep the enemy from doing the same. “We must have fully integrated offensive and defensive operations across all of our services, as well as our partners,” he told me. “And I think it’s the combined work and expertise with truly enables us to project that combat power needed to deter and defeat if necessary our adversaries.”

“I will tell you, externally, the objective is to foster, really, a DoD- wide understanding of the difference between the mission requirements and objectives of the new US Space Command, compared to that of our former predecessor — that command back in 1985 to 2002,” he said. That difference is that in its new incarnation, SPACECOM isn’t just providing space capabilities to others, it also has the reins in conducting combat operations to defense US space assets.

Dickinson stressed that it is “critical, quite frankly, as the newest combatant command, to ensure our mission imperatives are, in my words, crystal clear to our Space Command warriors, to our partners and allies, the American people and to our adversaries and competitors.

“I think the document is valuable to the general public as well, primarily in order to engender the realization that space is central to our way of life. Given the threats we face in this domain, it is worthy of our focused efforts to protect and defend it,” he added.

In a clear signal to the Biden White House, Dickinson told me he hopes this year will include “continued advocacy and support of the national-level leadership in the space enterprise.”

Dickinson’s eight-page manifesto, “Never A Day Without Space: Commander’s Vision” –– provided to Breaking D — was briefed to SPACECOM today. It will be the “baseline” for future development of subordinate SPACECOM planning guidance, campaign plans, operational plans and other organizational documents required to running the 18-month-old Combatant Command, Dickinson explained.

The general’s stress on the need for both ‘offensive and defensive’ operations to achieve space superiority is not new, even if it makes some US security experts — including some Democrats in Congress — a bit queasy. It is one of the first things his predecessor, Air Force Gen. Jay Raymond who now heads the Space Force, made clear when SPACECOM was stood up in August 2019.

Indeed, despite the recent hyped-up rhetoric about space newly being a ‘warfighting domain’ due to the development of satellite-killing weapons by China and Russia, the US officially deemed space a potential battlefield way back in 1976 under Ford administration, Brian Weeden, Secure World Foundation’s head of program planning and a former Air Force officer, said in an email. Brent Scowcroft, who was then national security advisor to President Ford, on July 7 issued a presidential decision directive (PDD) (now partially declassified) “on the need to improve resilience/defensive measures against hostile threats,” Weedon explained, namely Soviet anti-satellite developments.

“The problem is, we never really got around to doing that and these policy decisions were all classified or hidden from the public for political reasons,” Weeden said. “The big change the Trump Admin made was to publicly declare space a warfighting domain, which allowed a lot more agencies to take steps in that direction.”

Speaking to the Mitchell Institute on Tuesday, Dickinson himself noted that space has been part of military operations since the dawn of the space age. However, he said, “The question now is how we will integrate the traditional military capabilities of other domains into space warfighting operations. That will be the true test of how we will, collectively the US Armed Forces, execute the directives outlined in the Unified Command Plan to protect and defend us and allied interests in space.”

As Breaking D readers were first to learn, the revised UCP sent by Chairman of the Joint Chiefs of Staff Gen. Mark Milley to President Trump included a number of changes designed to delineate the role of SPACECOM — designated as a new geographic command with an area of responsibility (AOR) from 100 kilometers above the Earth to, well, infinity and beyond in theory —  vice the 10 other Combatant Commands. These include giving SPACECOM the lead in deciding who gets priority use of communications satellites during combat, and what targets missile warning and space surveillance sensors are tasked to monitor. Trump signed the revised 2020 UCP Jan. 13, a spokesperson for the Joint Staff confirmed.

The UCP (while no longer classified, is labeled For Official Use Only and is not publicly available) also includes new SPACECOM responsibilities for global responsibilities, such as “global sensor manager” and “global satcom bandwidth manager.” Global sensor management refers to matching the capabilities of the myriad sensors that contribute to space domain awareness and missile warning to specific missions. Likewise, the global SATCOM bandwidth management job requires SPACECOM to provide services to commanders and troops on the field, but also to protect and defend satcom capabilities.

Dickison elaborated during his conversation with Mitchell Institute Dean Dave Deptula that SPACECOM now has three primary missions: “One, our enduring, no-fail mission to enable warfighting operations in other domains. Two, our future mission as global SATCOM manager and global sensor manager. And three, our current new mission set compelling us to fight and win in the space domain in order to protect and defend our interests there.

“Additionally, this warfighting domain is growing, and this AOR is by far the biggest and is getting bigger, each day,” he added.

It’s incredibly important, Dickinson told me, that civilians and other services within the Pentagon — as well as Congress — understand that “what’s new is not only do we have that enduring responsibility to provide support to the warfighters on the ground — as I said from the ultimate high ground to the last tactical mile — but also that we are now a ‘supported’ command in some of the ‘protect and defend’ missions that we’re doing in the on orbit.”

He told the Mitchell Institute that being a supporting command to the other CoComs means “that we provide the space mission areas or services that we have for years and years — satellite communications and GPS, for example. We continue to do that.” That responsibility lies primarily within the purview of Maj. Gen. DeAnna Burt, who has been named commander of SPACECOM’s Combined Force Space Component Command at Vandenberg AFB in California. That command provides day-to-day support for global operations.

The ‘protect and defend’ mission, which would include any offensive action in a conflict, is carried out by the Joint Task Force Space Defense, commanded by Brig.  Gen. Tom James. “In that particular mission area, as you can imagine, there’ll be opportunities or there’ll be circumstances where we’ll rely on other Combatant Commands that have capabilities or assets within their area of operation that we will need in order, or depend upon in order, to do our mission on orbit,” Dickinson told Mitchell.

Despite the new UCP, however, Dickinson was coy with me about how exactly the decisions about who supports whom when are actually made, and at what level of the US military hierarchy. “Command decisions reside with the Combatant Commander,” he said, although “many of those decisions may be made well above us depending on the situation.”

Some of this, he said, is because such details remain classified. However, a number of sources intimately familiar with these issues tell me that a big problem is that there simply hasn’t yet been any agreements codified on how those decisions will be made. The hope is that the impending Joint Warfighting Concept, in which space plays a central role, will go some ways toward clarifying those questions.

In reality, the process for determining which Combatant Command gets priority access to space assets isn’t a new issue — those were questions Strategic Command (STRATCOM) had to answer when it was responsible for space operations before to the latest SPACECOM was created. Indeed, that issue of priority, in this case for which targets US spy satellites fix on when, has been a perennial bone of contention between military commanders and the National Reconnaissance Office (NRO). Sorting that out is one of the jobs of the National Space Defense Center, which falls under James’ Joint Task Force Space Defense.

As for when Dickinson gets to call in, for example, a strike on enemy jammers blocking military communications satellites, he said only that there is plenty of precedent to follow as SPACECOM matures from how the other Combatant Commands have made those decisions. Further, he said, exercises to work out those decisions are already being embedded in the Globally Integrated Exercises launched by Milley’s predecessor Gen. Joe Dunford in 2018 to improve cross-domain and cross-AOR integration in future globalized, all-domain conflict.

Dickinson told me that in order to ensure that space capabilities are fully integrated into US military operations, SPACECOM is putting “integrated planning elements” led by an O6 (Air Force, Army, Marine Corps Colonel, or a Navy Captain) into each of the other Combatant Commands. Those leaders won’t have command decision authorities, rather facilitate the use of space assets and “provide a two-way information flow” between SPACECOM and the other commands. About seven of those are already in place, he said.

The Commander’s Vision documents lays out what Dickinson sees as the five key tasks for his forces in enabling SPACECOM to flourish as part of the joint force: