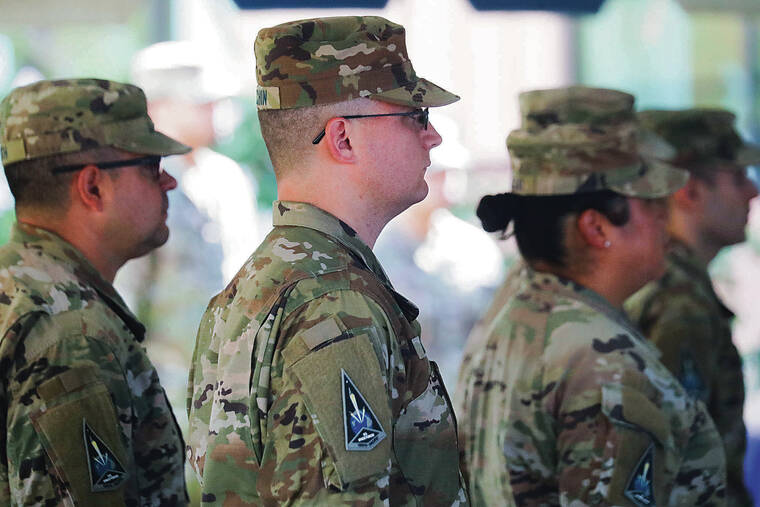 Brig. Gen. Anthony Mastalir will lead the new organization, which initially will be made up of fewer than a hundred troops, known as Guardians.

The new command comes at a time when the region is gripped with geopolitical tensions.

“It’s no accident that (it) happened here in the Indo-Pacific first,” said Adm. John Aquilino at a ceremony at Camp Smith. “This is the most challenging theater that we have to take on, and the capabilities that the Space Force delivers are second to none.”

Brig. Gen. Anthony Mastalir will lead the new organization, which initially will be made up of fewer than a hundred troops, known as Guardians. Mastalir will answer to Aquilino, who oversees U.S. Indo-Pacific Command, the Pentagon’s largest area of operations.

Oahu is the nerve center for all military operations in the Pacific, East Asia, the Indian subcontinent, Oceania and parts of the Indian and Arctic oceans. To operate across the vast expanse, the military has for decades relied on systems in space.

“Satellite communications enable much of what we do in this theater,” said Mastalir in an interview Monday with reporters.

Mastalir’s Guardians will have the smallest presence of the six military branches in Hawaii.

He said they will be responsible for supporting the operations of the other branches by ensuring they have reliable access to space-based systems and services. It’s highly specialized work, and Mastalir said he hopes to use his limited resources effectively.

The U.S. military considers China to be its “pacing threat” as tensions simmer over access to trade routes and resource deposits. At the activation ceremony Tuesday, Space Force commandant Gen. Chance Saltzman said that in the event of a potential conflict with China, “we find ourselves competing against a thinking adversary who continues to field counter-space systems as well as their own exquisite space-based support systems along with their increasingly capable terrestrial force.”

The Space Force was first stood up in December 2019 under the administration of then-President Donald Trump. The effort to establish a new military branch was immediately controversial.

U.S. Sen. Brian Schatz of Hawaii called it a “dumb idea” in 2018 and tweeted that “Although ‘Space Force’ won’t happen, it’s dangerous to have a leader who cannot be talked out of crazy ideas.”

The global economy is increasingly dependent on satellite networks to maintain steady communications and supply chains. Global Positioning Systems have become central to navigation for military and commercial endeavors alike.

A 2013 threat assessment by the Department of Homeland Security warned that “often, these critical dependencies do not become apparent until a GPS disruption occurs” and that “the increasing convergence of critical infrastructure dependency on GPS services with the likelihood that threat actors will exploit their awareness of that dependency presents a growing risk to the United States.”

Despite international treaties agreeing not to militarize space, the definitions of what actually counts as “militarization” or “space weapons” never been internationally agreed upon — and has been hotly disputed.

Nearly all modern militaries at least use various forms of satellite-based communication and surveillance. Nations as varied at China, Russia and India for decades developed and fielded military systems focused on space, including anti-satellite missiles and satellite communications jammers.

Lately, North Korea has been investing heavily in space systems and cyberwarfare alongside its missile program. This year has seen a historic number of tests from the country, including a missile Friday that analysts say is capable of hitting anywhere on the U.S. mainland. Missile detection will be among the jobs Space Force is set to embrace, Mastalir said.

Missile threats —and how to deal with them — have been a hot-button issue in Hawaii. The U.S. Missile Defense Agency awarded Lockheed Martin a contract for $585 million in December 2018 to develop, build and deliver the Homeland Defense Radar-Hawaii, with work set to be conducted in New Jersey and Hawaii.

The contract came on the heels of the Jan. 13, 2018, false missile alert that rattled Hawaii residents amid heightened tensions with North Korea.

But costs quickly started stacking up, and residents raised concerns of potential impacts to the environment and Native Hawaiian cultural sites. Other critics argued that the space-based detection systems being developed would render the HDR-H obsolete and redundant by the time it was finished.

The Pentagon tried to defund the program, but Hawaii’s congressional delegation continued to fund the project against the Pentagon’s objections until this summer.

Schatz told the Honolulu Star-Advertiser in an email at the time that “based on new and ongoing assessments, there seem to be better, more-effective ways to protect Hawaii from missile attacks without this program.”

Most current members of the Space Force, including Mastalir, began their military careers in the Air Force, and the service still answers to the secretary of the Air Force — similar to how the Marine Corps is a separate branch but a part of the Department of the Navy.

In Hawaii the Air Force has already been heavily involved in space operations. Before Mastalir’s arrival, Guardians in Hawaii answered directly to Air Force commanders.

Critics of the Space Force argue that creating a separate branch to take on work the Air Force already did makes it redundant. But supporters argue that building it up as a separate branch will make it easier for military space operators to deal directly with the other branches to address their satellite and space needs.

Mastalir said that among his top priorities is integrating Guardians with the Army and naval forces in the region. He said that while Guardians can work nearly anywhere in the world operating space systems, figuring out how they will work with the people on the ground who rely on these systems is vital.

“Being able to provide those command and control options here in theater is something that I will look to explore and build as we continue to flesh out what this particular component is going to be able to provide,” he said.