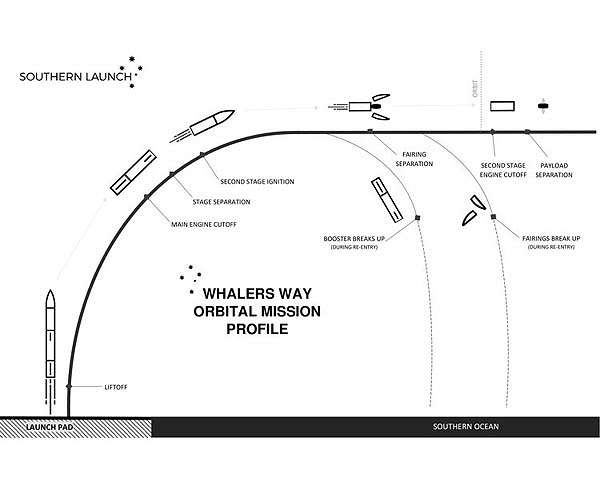 Adeliade, Australia (SPX) – All based in Adelaide, South Australia, the companies include Fleet Space Technologies, Inovor Technologies and Southern Launch.

Southern Launch has been approved to conduct three rocket test launches from its site at Whalers Way reserve on the southern tip of the Eyre Peninsula in South Australia.

The State Commission Assessment Panel has approved Southern Launch to build the infrastructure required to commence three tests before 31 December.

Southern Launch will establish a permanent orbital facility near the local town of Port Lincoln, making it one of only two such facilities in the Southern Hemisphere.

Southern Launch is required to obtain a launch licence from the Australian Space Agency, also based in Adelaide, South Australia, to secure the official dates of the tests.

The strict conditions of the development, including the Operational Environmental Management Plan (OEMP) will require consultation with South Australian government agencies and the local council.

The three launches will also be tested and managed for potential impacts during the test campaign.

The equipment and infrastructure will then need to be removed and the site returned for conservation, recreational and tourism purposes once the tests are completed.

Inovor Technologies and Fleet Space Technologies both announced they are expanding their satellite capabilities.

Dr Matthew Tetlow of Inovor Technologies, based at Lot 14 in Adelaide, South Australia.

The 250 kilogram Australis satellite is being developed at the Lot Fourteen innovation district in the CBD of Adelaide, which is also home to the Australian Space Agency and other space organisations such as the SmartSat CRC.

“We’re excited to be building upon the technology we have developed in our Apogee Cubesat bus and, with support from international partners, we will be expanding our capabilities with the Australis range of spacecraft,” Tetlow said.

“We’re able to enter the small satellite market earlier than planned, so we are, and we look forward to making another exciting announcement later in the year.”

Fleet Space Technologies, an Internet of Things company that has scheduled its sixth nanosatellite this month, has been awarded $386,770 as part of the Australian government’s Moon to Mars Supply Chain Capability Improvement grant program.

This grant will enable Fleet Space to improve the capabilities of its agnostic hybrid satellite low-powered wide area network (LPWAN), as well as expanding on its already deployed solutions for partners SA Power Networks and mining company OZ Minerals, including collaborating to miniaturise and ruggedise sensors in the network.

“It is an exciting acknowledgment of the high quality of work we are producing right here in Australia, and a step towards scaling up our capacity for global space industry customers to access,” she said.