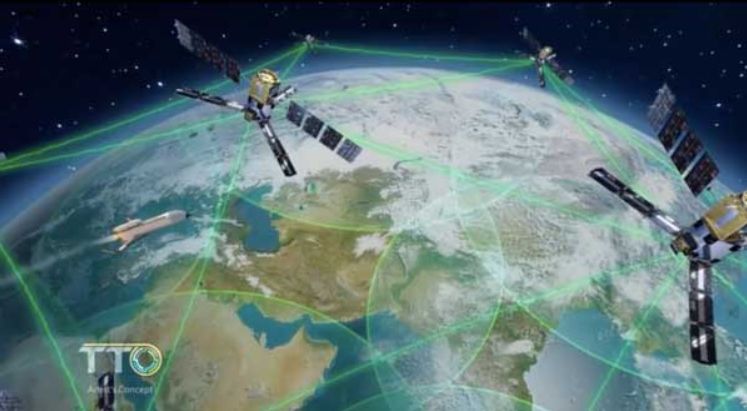 By Theresa Hitchens,
Published by Breaking Defense, 10 May 2021

Blackjack is widely seen by the satellite industry as a boot-strap into a lucrative DoD market for smallsats in Low Earth Orbit (LEO). DoD sees LEO constellations as potentially providing a host of services to warfighters in highly-contested conflict zones — both as alternatives to today’s uber-expensive handful of milsats, and as a foundation for Joint All Domain Command and Control (JADC2).

Alternate (sometimes called ‘assured’) PNT is one of the most desired by Combatant Commanders, who worry that GPS sats (which are relatively easy to jam) will be one of the first things lost in any war with China and Russia.

“Northrop Grumman’s software-defined Positioning, Navigation and Timing (PNT) technology will offer military users an agile new signal from low Earth orbit (LEO) that is not dependent on existing satellite navigation systems,” Nicholas Paraskevopoulos, chief technology officer, said in a company release. “Warfighters depend on assured PNT not only for traditional missions like force projection and joint operations, but also for emerging autonomous and distributed missions.”

A DARPA spokesperson said Northrop Grumman’s $13.3 million Phase 2 contract covers the development of two PNT payloads; and that the agency is not planning to fund any more PNT payloads under the program.

The defense giant has a pedigree in the ‘black’ side of military space — for example, building classified birds for the NRO — but is a bit of late-comer to the Blackjack party. DARPA’s Tactical Technology Office (TTO) launched Blackjack in 2018 with three goals based on redesigning commercial technology and manufacturing practices:

Lockheed Martin was chosen as the prime integrator of payloads and satellites for Phase 1 of the program last April; this April it won a follow-on contract modification worth $27.3 million for Phase II integration (for a total of $40.4 million).

In February, DARPA gave Blue Canyon Technologies (now a subsidiary of Raytheon Technologies) another $26.5 million to build six more standardized satellite buses as a second installment in a contract awarded last year (with the first option worth $14.1 million). Under the original contract, the company was to produce four busses by this June, but that timetable has now slipped to the end of the year. The six additional satellites are expected to be delivered by the end of 2022, according to a company release.

Raytheon last June was chosen to provide an Overhead Persistent Infrared (OPIR) sensor under a  a $37.4 million contract, which will be integrated into multiple bus designs and the Pit Boss cloud-based, autonomous mission management system for the constellation. Pit Boss itself is being developed by SEAKR Engineering and Scientific Systems Co. Inc (SSCI), which was awarded $60.4 million in March for Phase 2 and Phase 3 development.

SA Photonics is building two optical inter-satellite link payloads under the Mandrake II ‘risk reduction’ experiment to support both Blackjack and the Space Development Agency’s effort to develop multiple LEO-based constellations — including a set of Transport Layer data relay satellites to serve as the JADC2 communications backbone. Scientific Systems Co. Inc (SSCI) is managing yet another Blackjack risk reduction data fusion experiment, which will involve the Sagittarius A* Innoflight processor — loaded with SSCI’s battle management, command, control and communications software — being launched later this spring on a tiny YAM-3 microsatellite provided by start-up Loft Orbital. The YAM-3 will be launched by SpaceX on a Falcon-9 as part of a ride-share (i.e. along with multiple other small satellites.)

DARPA hopes to launch its first four experimental sats by the end of next year; up to 20 birds could be launched in all.