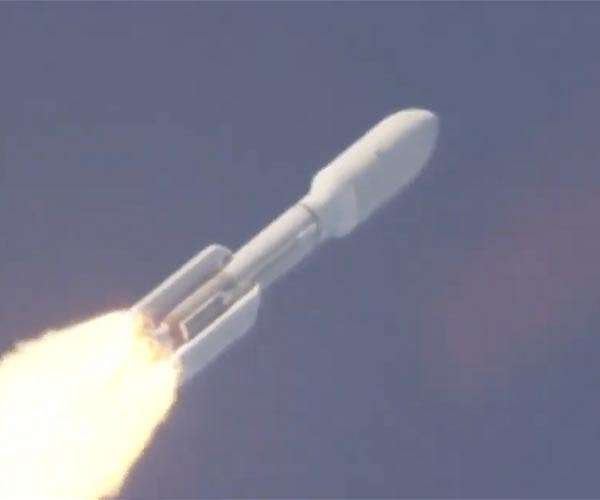 The Atlas V rocket lifted off at 1:37 p.m. EDT into a mostly blue sky from Complex 41 at Cape Canaveral Space Force Station. After just a minute into flight, the vehicle traveled at 2,000 mph.

The satellite, known as SBIRS GEO 5, is the fifth in a series that use infrared sensors to detect missile launches around the world, according to the Space Force.

The rocket’s Centaur second stage released the SBIRS satellite over the Indian Ocean about 43 minutes after launch into the intended orbit, according to ULA. The launch company plans to launch a sixth and final SBIRS satellite in 2022.

Built by Lockheed Martin, the spacecraft is the first of the SBIRS GEO to fly on an upgraded platform that provides better anti-jamming capability and more power, according to ULA’s mission profile.

One of the infrared sensors “continuously scans the Earth” to provide around-the-clock global strategic missile warning capability, according to Lockheed Martin.

Another sensor, called a step-starer, has an accurate pointing and control system to scan “specific intelligence areas of interest,” according to the company.

The SBIRS satellites were used in January 2020, when Iran attacked the Al Asad Airbase in Iraq, where U.S. troops were stationed, Air Force Lt. Adam Farah said during the mission webcast.

“Operators were able to use the SBIRS capabilities to detect the threat, warn our troops on the direct path of the missile,” Farah said.

The rocket also carried two small demonstration satellites for the military, TD3 and TD4, sponsored by the Department of Astronautics and the U.S. Air Force Academy, according to a ULA announcer during the webcast.

ULA had postponed the launch Monday due to a potential problem detected by electronic sensors in the liquid oxygen propellant fuel supply system, the company said.