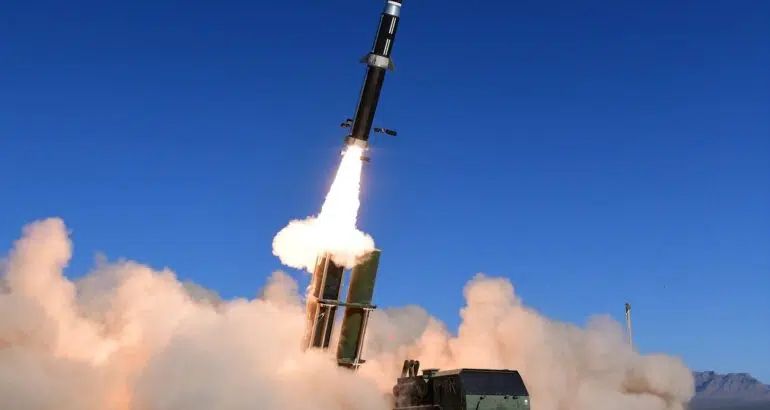 The DARPA OpFires Project will use throttleable rocket motors on hypersonic missiles to achieve varying ranges in flight; therefore, OpFires can hit targets within the range envelope up to 1,000 miles (1,609 kilometers).  At Mach 5+, the OpFires’ warhead can fly 1,000 miles in approximately 20 minutes.

According to the DARPA website on the OpFires’ first test fire launch on July 13, 2022, “DARPA’s Operational Fires (OpFires) program has successfully executed its first flight test at White Sands Missile Range in New Mexico. The OpFires system achieved all test objectives, including first ever use of a U.S. Marine Corps (USMC) logistics truck as a medium-range missile launcher, missile canister egress, stable flight capture, and use of U.S. Army inventory artillery fire control systems to initiate the test mission. Lockheed Martin built the system, which includes a Northrop Grumman rocket motor, and conducted the test.

“The test demonstrated integrated technology maturation of key enabling components including the first stage rocket motor, missile canister, and missile round pallet (MRP). The MRP is designed for use with the load handling system available on USMC and Army logistics vehicles, eliminating the need for a bespoke OpFires transporter erector launcher (TEL).

“The primary goal of OpFires is the development and demonstration of a ground-launched two-stage propulsive system capable of employing hypersonic (greater than five times the speed of sound) payloads from ubiquitous U.S. military trucks (the Palletized Load System family of vehicles) that can penetrate modern air defenses and precisely strike time-critical targets. Compatibility with existing command and control, vehicles, logistics infrastructure, and operating environments ensures that OpFires is highly mobile and rapidly deployable.”

Naval News: How far did the hypersonic missile fly?
DARPA: The missile range of this test was intentionally limited to keep it within [the] WSMR [White Sands Missile Range] safety boundaries.

Naval News: Were the USMC and US Army both present at the test?
DARPA: No.

Naval News: How many missiles were launched and what was the speed of the hypersonic
missile?
DARPA: This test was limited to a single missile.

Naval News: Any dimensions and specifications on the missile for the Media (weight, dimensions, cost, payload, etc.)?
DARPA: The OpFires missile system has the ability to carry a variety of payloads and the system (missiles, canister, and launcher) is sized to fit on the [U.S.] Army M1075A1 PLS and USMC LVSR family of vehicles.

Naval News: Did the missile contain a warhead or Glide Body and can it hit moving maritime and ground targets?
DARPA:  This test demonstrated the ability to successfully launch a full-scale OpFires missile from an LVSR.  Our flight test plan calls for the next flight to include a payload simulator and through a series of progressive flights, we will fully test the booster and payloads.

Naval News: Any comments on how fast the Kill Chain Web was from acquisition time-on-target to launch?
DARPA: This was not one of the test objectives.

Naval News: What other lessons were learned from this test?
DARPA: We are continuing to review the data and will incorporate findings into the system critical design review in the Fall.