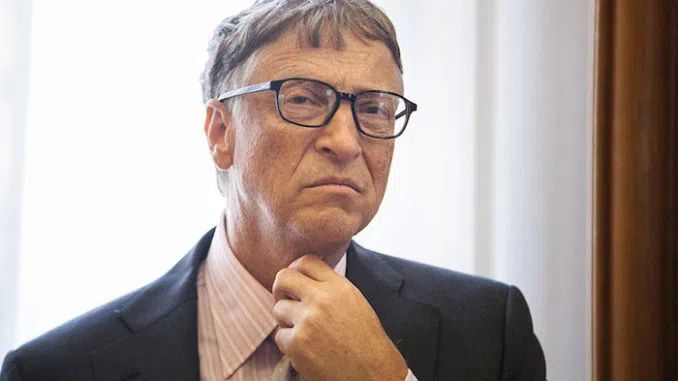 Almost every corner of the planet will soon be monitored by video surveillance satellites capable of live-streaming coverage of human activity for “governments and large enterprises”— if Bill Gates gets his way.

Microsoft founder Bill Gates is bankrolling a company that is using a $1 billion initial equity allocation from investors to plan a network of satellites to provide real-time coverage of almost every location on Earth.

Washington-based company EarthNow plans to launch an army of more than 500 satellites into our atmosphere, providing its users with near instantaneous video feedback with only one second of delay.

“Does anyone share my dread that Bill Gates — and his Mini-Me, Tony Fauci — will somehow be running our Brave New World?” said Kennedy on Instagram. “

“Imagine a world where the government doesn’t need police officers to apprehend those surfers or ticket you when you violate social distancing with your girlfriend. Suppose that computers discover your beach trip by tracking your movements using a stream of information from your cell phone, your car GPS, facial recognition technology integrated with real-time surveillance from satellites, mounted cameras, and implanted chips.”

“Welcome to Bill Gates’ America,” he added. “It’s right around the corner.”

While the plan to blanket the world in surveillance cameras may sound like the plot from a bad sci-fi movie, the project to surveil the entire planet in real-time is very much a real thing, due in large part to Bill Gates’ funding.

EarthNow boasts that a customer of the surveillance network will be able use their smart phone or tablet to get instant, live access to what’s going on in almost any part of the world.

Users will be able to watch the weather, detect forest fires the moment they start, observe volcanoes as they erupt and track the migration of animals including birds and whales.

While the EarthNow press release sounds benevolent enough, users can also “observe conflict zones and respond immediately when crises arise, assist the media in telling stories from around the world, catch illegal fishing ships in the act, and instantly create “living” 3D models of a town or city, even in remote locations.”

The obvious question is who will be the “users” of this technology. According to Wikipedia, the company expects its initial customers to include “governments and large enterprises.”