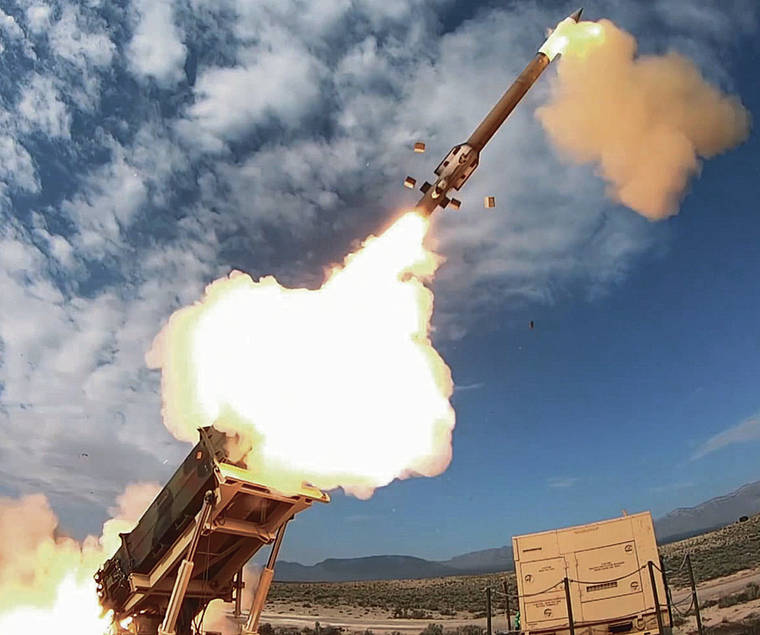 By William Cole,
Published by the Honolulu Star Advertiser, 23 July 2021

A demonstration of Army Patriot missile defense capability is coming toward the end of August—not for the defense of the Aloha State, but to showcase the versatility of the missile that could play a role in the protection of Guam and other Western Pacific nations, defense experts say.

Since it was first fielded, the well-known Patriot missile system has been used by five nations in more than 250 combat engagements against manned and unmanned aircraft, cruise missiles and tactical ballistic missiles, the Raytheon Co. said.

Patriot since January 2015 has intercepted more than 150 ballistic missiles in combat operations around the world, according to Raytheon.

A single or multiple Patriots will be fired from a truck launcher at the Pacific Missile Range Facility at one or two target rockets.

Separately, the Missile Defense Agency is expected to attempt to shoot down a threat-representative target missile using an SM-6 missile, which has both offensive and defensive capabilities and provides protection to aircraft carriers.

In May off Kauai, two SM-6 ship-fired missiles failed to intercept a medium-range ballistic missile target. The appearance of a Russian spy ship off Kauai briefly delayed the test.

“The objective of the test was to demonstrate the capability of ballistic missile defense (BMD )-configured Aegis ship to detect, track, engage and intercept a medium-range ballistic missile target with a salvo of two Standard Missile-6 Dual II (BMD-initialized ) missiles. However, an intercept was not achieved, ” the Missile Defense Agency said in a news release.

“Russia is testing hypersonic weapons and maybe seeking insights into our missile systems that might enhance their hypersonic weapons’ ability to penetrate our defenses, ” retired Navy Capt. Carl Schuster, a former director of operations at U.S. Pacific Command’s Joint Intelligence Center, said at the time of the appearance of the Russian ship.

If the target missile replicated characteristics of a hypersonic missile, it may have been harder to hit with the SM-6, which is known for its reliability.

The Army will be demonstrating its Patriot capability in Hawaii after it recently fired a pair of Patriot missiles for the first time in Australia on July 16 during exercise Talisman Sabre, and following a simulated Patriot Advanced Capability (PAC-3 ) launch from Amami Island off Okinawa during exercise Orient Shield.

The Patriot missile road show is intended to demonstrate to Pentagon planners looking at the defense of Guam and Pacific nation allies that the missile is a viable and mobile candidate for the job, said Bryan Clark, director of the Center for Defense Concepts and Technology at the Hudson Institute.

“This is all about the Army showing its relevance for the Pacific theater, ” Clark said. The service “is trying to demonstrate that the Patriot is a useful missile system to defend remote installations in the first island chain, so Japan, the Philippines, Taiwan maybe.

“They are trying to make the case to (U.S. Indo-Pacific Command ) that they are part of the solution maybe for Guam—because right now there’s a big debate in D.C. about the defense of Guam and how best to do that.”

Adm. Phil Davidson, former head of U.S. Indo-Pacific Command on Oahu, told the Senate Armed Serv ­ices Committee in March that Guam needs fixed, 360-degree air and missile defense that would be capable of meeting cruise and ballistic missile threats from bombers and other platforms.

“Guam is a target today, ” Davidson said. “It needs to be defended, and it needs to be prepared for the threats that will come in the future, because it is clear to me that Guam is not just a place that we believe that we could fight from, as we have for many decades. We are going to have to fight for it in order to be able to do that.”

The THAAD radar “is not capable of meeting the current trajectory of threats from China, ” he said.

Davidson said he was advocating for an Aegis Ashore system—a test version of which is located at PMRF. The system can operate with a variety of missiles, including the soon-to-be-fielded SM-3 Block IIA, which was successfully tested in November against an ICBM target in Hawaii.

“It would be a mixed bag, and that would be a challenge for them to integrate, ” he said. Some defense planners think the fastest way to get better missile defense for Guam is to use Aegis Ashore. Industry, meanwhile, is working on ways to incorporate various other missile defense systems over time, Clark said.

The 1st Battalion, 1st Air Defense Artillery, out of Okinawa will fire the Patriot missile on Kauai, said Capt. Nicholas Chopp, a spokesman for the 94th Army Air and Missile Defense Command at Joint Base Pearl Harbor-Hickam.

About 50 to 60 personnel from the 94th will take part in the missile operation, Chopp said.

“I can’t speak for the Department of the Army. I can speak for the 94th in that we have all of the Army air defense assets in the Pacific, and Patriots are a significant part of that, ” he said. The missile is part of a “time-tested proven system, (and ) basically, we take every opportunity we can to exercise our expeditionary operations.”