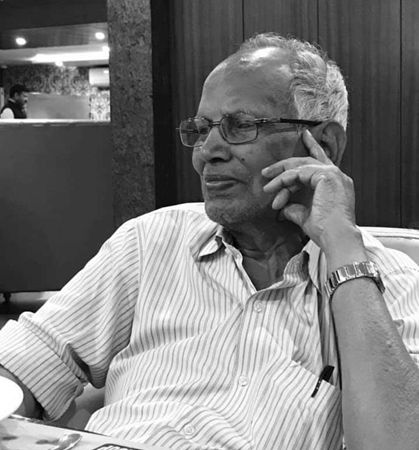 In remembrance and celebration of J. Narayana Rao from Nagpur, India – Global Network Board Member and our friend, colleague and comrade who sadly passed away during the Covid pandemic.

J Narayana Rao: belonged to a village near Visakhapatnam in Andhra Pradesh.

In 1958 he went to work for the Indian Railways and joined the Railway Trade Union Movement.  He was arrested in 1973 and 1974 for Trade Union activities.

While in Railway Service and in the Railway Trade Union movement he was attracted to the peace movement and joined the All India Peace & Solidarity Organization (AIPSO) in 1982.  AIPSO is an Indian affiliate of the World Peace Council.  At present he is the General Secretary of AIPSO of the Maharashtra State Council.

Rao’s zeal to work against nuclear weapons, war, and to support the struggles of the developing countries against imperialist domination led him to believe that unless women and youth are brought into the peace movement there will not be a real movement in India.

Rao was also instrumental in establishing the Indian Doctors for Peace & Development in Maharashtra State. This Organization is the Indian affiliate of IPPNW.

He retired from Railway service in 1994 and after retirement established the Southeast Central Railway Pensioners Association and served as General Secretary.

On several occasions in recent years Rao published, at his own expense, special publications promoting the work of the Global Network.  In 2006 Rao organized the five-city speaking tour for GN staffers in India.

He organised many such tours for GN board members and all of them involved meeting with and talking to young people – often with very large audiences.

Rao had been suffering illness for some time and was seriously ill in hospital when Bruce wrote about him in his blog on May 11.

Unfortunately Rao was eventually taken by the Covid Corona virus on 18th May at 11:50pm.

On June 2nd 2021 (Rao’s birthday) a zoom meeting was held for family, friends and fellow members of the Global Network – many wonderful tributes to Rao were made. Here is the link to a recording of the event:

A slideshow put together by Dave Webb with photos of Rao starts at 1:08:00 (or you can see it seperately here:

also, near the end at 1:24:49, is a short and touching memorial for Rao by his friends and comrades in Nagpur

Rao will always be remembered by us for his wisdom and understanding, his organising skills, his dedication to the cause of peace and for his many other qualities all referred to in the video session. He was a humble man but extremely effective in his work – he will live long in our hearts and memories.

We will miss him very much – he was one of our greatest leaders.