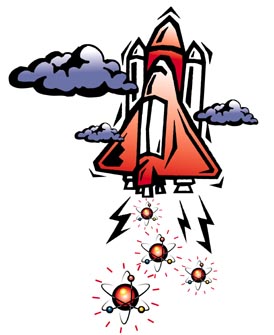 Twenty years ago, I began to learn about plutonium-238, the isotope of plutonium used in space. I was familiar with plutonium-239, built up in nuclear power plants and used in nuclear weapons. My first book on nuclear technology, Cover Up: What You ARE NOT Supposed to Know About Nuclear Power, was published in 1980.

I was reading, in 1985, a Department of Energy publication about plans by NASA, working with the DOE and several national laboratories, to launch two space shuttles carrying plutonium-fueled space probes the following year. One of the shuttles was to be the Challenger.

The publication, DOE Insider, stated that DOE had considered "postulated accidents" including "launch vehicle aborts, reentry, and impact and post-impact situations." Knowing about the lethality of plutonium—long described as the most toxic radioactive substance, with a particle less than a millionth of a gram lodged in a lung capable of being a fatal dose—I filed a Freedom of Information Act request with NASA, DOE and the national labs. The DOE Insider said "postulated accidents" on the shuttle shots were studied—what were the results?

I met a wall of resistance. Finally, after protesting the apparent cover-up, I was sent information in late 1985. There would be serious impacts, it was acknowledged, if the plutonium was released in an accident—although NASA and/or DOE personnel had spent considerable time and Liquid Paper censoring the numbers of people who would be affected.

The agencies maintained there was "a very small risk of releasing plutonium-238" because of the "high reliability inherent in the design of the space shuttle." They gave 1-in-100,000 odds for a catastrophic shuttle accident.

On Jan. 28, 1986, driving to teach my Investigative Reporting course at the State University at New York, I heard over the car radio that the Challenger had blown up soon after launch. Stopping at an appliance store, I viewed the terrible image on scores of TV screens and thought about what would have happened if this accident had occurred on the next mission of the Challenger, in May 1986, when 24.2 pounds of plutonium-238 were to be on board.

"Far more than seven people could have died if the explosion that destroyed Challenger had occurred during the next launch," I wrote in a front-page editorial for The Nation. And I've been deeply involved doing investigative reporting on the space nuclear issue ever since.

NASA, incidentally, changed the odds of a catastrophic shuttle accident soon afterward—from the 1-in-100,000, concocted out of whole cloth, to 1-in-76, about right in light of the subsequent Columbia shuttle accident. And consider if Columbia had had plutonium on board: Radioactive debris would have splattered over Texas and Louisiana.

I soon learned the accident record in the use of nuclear power in space was not good. Of the then two dozen U.S. space nuclear shots, three involved mishaps. The most serious: In 1964, a satellite with a SNAP-9A plutonium-238 power system on board failed to attain orbit and fell to Earth. It broke up, dispersing its 2.1 pounds of plutonium-238 fuel as fine particles. The release caused an increase in global lung cancer rates, according to Dr. John Gofman, professor emeritus of medical physics at the University of California at Berkeley.

The good news is that plutonium-238 is not fissile like plutonium-239; it won't explode. The bad news is that because it has a half-life of 87.8 years compared to 24,500 years for plutonium-239, it is radioactively hotter. That's why it's used in space: The intense heat of it breaking down is coupled in what's called a radioisotope thermoelectric generator (RTG) to produce electricity.

"Plutonium-238 is about 270 times more radioactive than plutonium-239 per unit of weight," notes Dr. Arjun Makhijani, the physicist who heads the Institute for Energy and Environmental Research. A factor of 270 to 280 is cited by physicists.

As a result of the SNAP-9A accident, NASA began doing pioneering solar energy development. Now all satellites are powered by solar energy, as is the International Space Station. But NASA and the DOE insist that to send space devices out into the solar system, plutonium-238 is needed to provide electricity.

The danger in this program is getting more severe. In 1997, NASA launched the Cassini space probe with the most plutonium-238 ever used on a space device—72.3 pounds. Moreover, it had Cassini do two "slingshot maneuvers" around the Earth—coming back from space and flying in low and fast and taking advantage of the Earth's gravity to increase its velocity so it could reach Saturn.

If on either of these Earth "flybys" Cassini had dipped into the atmosphere, it would have disintegrated and the plutonium-238 released and "5 billion... of the world population... could receive 99 percent or more of the radiation exposure," acknowledged the NASA's Final Environmental Impact Statement for the Cassini Mission.

The possible death toll was estimated by independent scientists as anywhere between 950,000 to 40 million.

Is this kind of enormous risk necessary? Not at all.

Last March, the European Space Agency launched its Rosetta space probe powered by new high-efficiency solar cells—and ESA made a point of stressing it was not using plutonium-fueled RTGs on this mission. Rosetta is to rendezvous with a comet near Jupiter. It will be 800 million miles from the sun yet energized by solar power.

But the U.S. would stick with plutonium—and now is greatly expanding its space nuclear program. The $3 billion Project Prometheus has begun, with much work to be done at Idaho National Laboratory, where also the production of plutonium-238 is to be "consolidated." Not only are there to be more plutonium-238 generating systems used in space, but under Project Prometheus, the U.S. would rocket back to the past and build a nuclear-propelled spacecraft—a scheme on which $10 billion was spent from the 1950s to 1972, when the undertaking was cancelled largely because of the still-present problem of an atomic rocket falling back to Earth.

For propelling spacecraft, new safe energy technologies have also been developed. There are "solar sails"—utilizing the ionized particles emitted by the sun that constitute a force in space. A space device with solar sails, built in Russia for the International Planetary Society, is to be launched in coming weeks.

Solar-electric propulsion is being used now on NASA's Deep Space 1 probe. Indeed, there is a group within NASA, its Photovoltaics and Space Environment Branch, which stresses the feasibility of solar power in space. On its website, Dr. Geoffrey, a scientist at the branch, declares: "In the long term, solar arrays won't have to rely on the sun. We're investigating the concept of using lasers to beam photons to solar arrays. If you make a powerful-enough laser and can aim the beam, there really isn't any edge of sunshine."

Then why the push for space nuclear power?

It's coming from a combination of interests. As "Deep Throat" instructed Bob Woodward in the Watergate investigation: "Follow the money." Lockheed Martin, the manufacturer of the plutonium-238 space systems, lobbies heavily for them. Both Lockheed Martin and Boeing want the business of building nuclear-propelled rockets under Project Prometheus and push hard for them. Then there are the national laboratories—including Idaho National Laboratory—promoting space nuclear power. It's a way to increase their budgets.

Then there is the military connection. The U.S. military has long been interested in space-based weapons and considers atomic power the ideal way to power them. "The fielding of space-based weapons of devastating effectiveness to be used to deliver energy and mass as force projection" is projected in a U.S. Air Force Board report, "New World Vistas: Air and Space Power for the 21st Century." As to energizing these weapons, it states, "A natural technology to enable high power is nuclear power in space."

NASA, although established in 1958, ostensibly as a civilian agency, is tied up with the military, especially since the most recent administrator, Sean O'Keefe, a former Navy secretary, took over. As Bruce Gagnon, coordinator of the Global Network Against Weapons & Nuclear Power in Space (www.space4peace.org), says, the relationship between NASA has never been closer.

"Now," says Gagnon, the notion of "dual use," a civilian/military linkage, "runs through NASA operations."

What goes up can easily come down, as Newton said centuries ago.

Putting nuclear poisons above our heads is asking for it. And the production of plutonium-238 at Idaho National Laboratory presents an enormous threat—on the ground, too.

Workers at the facility will be impacted. In 1996, the New Mexican reported in a front-page story, "Radioactive Mishaps Rising at LANL," "Mishaps in which workers and equipment have been contaminated with radioactive substances are on the rise at Los Alamos National Laboratory." The reason? "Lab officials say the rise in radiation exposure and radioactive mishaps since 1993 has one primary cause: the Cassini project [and] an ongoing effort to build radioactive heat sources." Being worked with, it was noted, was "an isotope of plutonium that is particularly difficult to handle, plutonium-238, which is many times more radioactive than the better known plutonium-239 used in nuclear bombs."

The processing of plutonium-238 at Los Alamos and the Mound Laboratory in Ohio has led to plutonium-238 contamination beyond the national laboratory boundaries. People off-site in Idaho can expect radioactive impacts—from accidents and routine operations.

It's the wrong stuff... for space and America.

Karl Grossman is author of The Wrong Stuff: The Space Program's Nuclear Threat To Our Planet and writer and narrator of the award-winning TV documentary Nukes In Space: The Nuclearization and Weaponization of the Heavens. He is professor of journalism at the State University of New York and hosts the nationally broadcast TV program Enviro Close-Up (www.envirovideo.com).